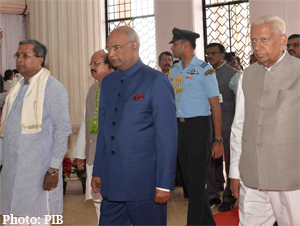 Yesterday is a memorable day for parliamentary democracy. I address this august Karnataka Legislature as the 14th President of the Republic of India on the occasion of the diamond jubilee of the VidhanSoudha. Personally also, it is a memorable day as I took oath as President of India in the presence of both Houses of Parliament on this very day, three months ago, that is 25th July, 2017.

This is my first visit to Karnataka since accepting the responsibility of the President of India. I have come on an occasion that celebrates the democratic traditions of our country and of this state. Today, we are commemorating the diamond jubilee of the VidhanSoudha, the seat of the legislature in Karnataka. It was inaugurated in October 1956 by the first President of India, Dr Rajendra Prasad. I am humbled to be following in his footsteps. It was my privilege to have served as Governor in the state of Bihar, the home-state of DrRajendra Prasad.

It is not just the 60th birthday of this building that we are marking. This is also the diamond jubilee of the debates and discussions in the two Houses, of legislations that have been passed and policies that have been shaped for the betterment of the lives of the people of Karnataka.

We are aware of the three D’s of the legislature, that it is a place to debate, dissent and finally decide. And if we add the fourth D, decency, only then does the fifth D, namely democracy, become a reality. The legislature is an embodiment of the will, aspirations and hopes of the people of Karnataka, irrespective of political belief, caste and religion, gender or language. It needs the collective wisdom of both Houses of the Legislature to fulfil the dreams of our people.

This spirit of debate and discussion, of inquiry and of service, is not limited to simply the VidhanSoudha or to political life. It has existed in the soil of this great state. Karnataka has been known through history for spiritualism as much as science, for its farmers as much as its technologists. Its contribution to the intellectual and cultural – and ultimately democratic – heritage of our country has been enormous.

This is a land with ancient Jain and Buddhist traditions. AdiShankaracharya founded the math in Sringeri in this very state. Gulbarga is a centre of Sufi culture. The reformist Lingayat movement under spiritual leaders such as Basavacharyawas also located in Karnataka. In their own way, each of these currents has contributed to nation building.

Karnataka is a land of formidable soldiers. Krishnadeva Raya was the greatest ruler of the Vijayanagara Empire, and remains an inspiration for all Indians. Kempe Gowda was the founder of Bengaluru. Rani Chennamma of Kittur and Rani Abbakka led among the earliest battles against colonial powers.

Tipu Sultan died a heroic death fighting the British. He was also a pioneer in the development and use of Mysore rockets in warfare. This technology was later adopted by the Europeans. More recently, two of our finest army chiefs – Field Marshal K.M. Cariappa and General K.S. Thimayya – were sons of Karnataka.

This is also the seat of education, technology and science. The engineer-statesman M. Visvesvaraya was a builder of modern Karnataka and of modern India. He was responsible for major irrigation projects that continue to help farmers to this day. The Indian Institution of Science and the Indian Space Research Organisation are among so many of our crown jewel institutions that are based in Bengaluru. The dynamism of its entrepreneurs has made Bengaluru India’s IT capital. It is known the world over as the Silicon City.

Both Houses of the Legislature jointly and collectively represent the will and aspirations of the people of Karnataka. Not just that, the two Houses also represent the ideals and optimism and the energy and dynamism of the Kannadiga people. This building is a monument to the history of public service in Karnataka. A galaxy of political stalwarts has participated in the proceedings of the two Houses that meet here. They have spoken in many memorable debates.

Today’s events will honour the families of the first three chief ministers of Karnataka – K.C. Reddy, KengalHanumanthaiah and KadidalManjappa. There are so many other names we must recall and cherish –S. Nijalingappa, DevrajUrs, B.D. Jatti, who later became Vice-President of India, Ramakrishna Hegde, S.R. Bommai, VeerendraPatil, S.M. Krishna and of course our former Prime Minister and my friend, H. D. Deve Gowda.

It is for the current members of the two Houses to take forward the legacy of these remarkable public representatives. It is for the Legislative Assembly and the Legislative Council to function as sacred temples of democracy, and contribute to raising the level of political and policy discourse.

A member of the House is elected by his or her voters. But once elected, the MLA or MLC represents the entire constituency, and not just those who have voted for him. The legislator equally represents those who did not vote for him or in fact those who opposed him.

A rival in an election is a political competitor and not an enemy. After the election, the competitor could become a colleague in the task of ensuring the well-being and development of a constituency or of our shared society. This is the beauty of a democratic polity that we must appreciate.

The opening of this building in 1956 coincided with the reorganisation of states and the creation of the boundaries of Karnataka state. In a sense, both these momentous happenings represented the sovereign will, the cultural and linguistic pride and the identity of the Kannadiga people. As such the people of this state are always the focal point of all our endeavours – and of all that is undertaken in this legislative building.

Having said that, Karnataka’s dreams are not for Karnataka alone; they are dreams for all of India. Karnataka is an engine of the Indian economy. It is a mini-India that draws – without losing its cultural and linguistic distinctiveness – youth from all over the country. They come here for knowledge and for jobs, and they give their labour and intellect. Everybody gains.

There was a time when Hampi, here in Karnataka, was one of the richest and greatest cities in the world. Today, as our country strives to regain its importance in the global economy and international system, once again we look to Karnataka to provide India with the enlightenment, the technology and unity of purpose to take us forward. And as representatives of the people of Karnataka, the members of the two Houses here have a special responsibility.

Those who provide it security are nation builders too. It is by the efforts of ordinary citizens, who diligently carry out everyday tasks, that nations are built. As you sit and work in this VidhanSoudha, I am confident you will never forget this and will continue to draw inspiration from it.