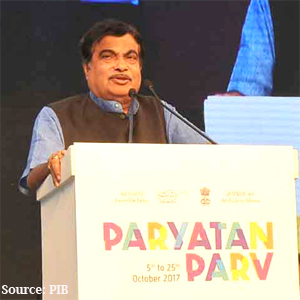 20th Day of Paryatan Parv celebrated across The Country

Nitin Gadkari, Union Minister for Road Transport, Highways and Shipping visited the “Paryatan Parv-Grand Finale” on its second day at the Rajpath Lawns, New Delhi yesterday. K.J. Alphons, Minister of State (Independent charge) for Tourism was also present. Ministry of Tourism in collaboration with other Central Ministries, State Governments and Stakeholders has organized “Paryatan Parv”, a nation-wide celebration of Tourism from the 5th to 25th October 2017.

Addressing on the occasion, Nitin Gadkari said that the Paryatan Parv is a very unique initiative of Ministry of Tourism in collaboration with other Central Ministries, State Governments and Stakeholders. He said that Paryatan Parv has received a very enthusiastic response from other Central Ministries and State Governments, who have come forward in organizing various activities and events.

Tomorrow on the day of official closing ceremony of Grand Finale of Parayatan Parv, Arun Jaitley, Minister for Finance and Corporate Affairs will be the Chief Guest and K.J. Alpohns will be present. In the afternoon, different States/ UTs will present their cultural performances viz. Assam will present Bihu ; Daman & Diu will present Macchi Dance; Andhra Pradesh will present Kuychipudi ; Rajasthan will present Chari & Ghoomer; Tamil Nadu will present Karakattam Thappattarm; Jammu & Kashmir will present Kashmiri Dances; and Telangana will present Perini. In the evening, Smt. Savita De4vi will present ‘Purab Ang Gayaki of Banaras Gharana’ which will be followed by Choreographed Cultural Performance by North Zone Cultural Centre.

Highlight of the Day-20 was a Workshop on “Responsible and Rural Tourism” organized in New Delhi.

As a grand finale to the 21 day Paryatan Parv, a three day event has been organised at the Rajpath Lawns, New Delhi (between Rafi Marg and Janpath) from the 23rd to 25th October 2017. The event is open to the public from 12 noon to 10 pm on all three days and includes Cultural Performances, a Crafts Bazaar multi-cuisine Food Court and other interactive activities to keep visitors engaged at the event venue.

The Food Court has 50 stalls set up by the States / UTs each showcasing their distinctive cuisine, the National Association of Street Vendors of India (NASVI) with street food from different regions as well as by the Institutes of Hotel Management and ITDC. The Crafts Mela with 50 stalls showcases the diverse handicrafts and handlooms of the country, arranged by the State Governments and Ministry of Textiles through the Office of the Development Commissioners of Handicrafts& handlooms. There are 15 Theme State Pavilions where each State showcases its tourism products and destinations. Cultural Performances by troupes from the different States/ UTs of the country are being staged from 1:00 pm to 4:30 pm on all three days.

Paryatan Parv has received a very enthusiastic response from other Central Ministries and State Governments, who have come forward in organizing various activities and events and based on reports received, the event which has spread to all regions of the country has been received very well and has attracted participation in large numbers.