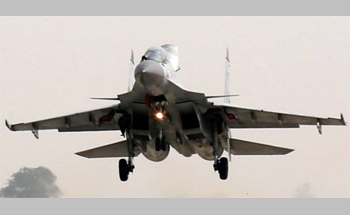 Indian Air Force carried out major landing operations on the Lucknow-Agra Expressway, about 60 km west of Lucknow, yesterday. The series of landings took place close to Bangarmau in Unnao District of Uttar Pradesh, where a 3 km stretch was specially prepared for such operations. The landing operations commenced at around 1015 hrs and continued till about 1200 hrs. A total of sixteen aircraft participated in the operation which comprised IAF’s frontline Air Superiority Fighters including the Sukhoi-30, Mirage-2000 and Jaguar fighter aircraft. These aircraft took off from Bareilly, Gwalior and Gorakhpur respectively. In addition, the IAF carried out drills in which Garud Commandos were inserted and extricated for ground operations, by the C-130J Super Hercules transport aircraft which took off from Hindon airbase.

A team of Senior IAF Officials headed by Senior Air Staff Officer HQ CAC, IAF Allahabad Air Marshal AS Butola were present to oversee the operations. While the operation was conducted under the aegis of HQ CAC, Bamrauli Allahabad, Air Force Station Bakshi Ka Talab Station Commander, Gp Capt J Suares and his team, were responsible for the overall control and coordination of the exercise.

On site arrangements were made for a Mobile Air Traffic Control, Radar Control, Meteorological Facility, Aerospace Safety and Security Control. In addition, to deal with any situation, crash, firefighting, rescue and medical teams were positioned. IAF sought assistance from State Government authorities for temporary closure of the expressway and other matters like crowd control, etc. A large number of police personnel were stationed along the stretch to ensure smooth conduct of operations.

The exercise commenced with an impressive short landing by the C-130 which on its landing roll itself started off loading the Garud Commandos and their vehicle in manoeuvre called Combat ERO (Engine Running Offload). Immediately on disembarking from the C-130, the Commandos took up position on either side of the airstrip to cordon it off for the fighter operations. This was followed by two sets of 3-3 Mirages, five SU30s and three Jaguars. All 14 fighter aircraft carried out a roller/touch and go manoeuvre on the expressway. The C-130 then returned for another short landing to extricate the Garud Commandos.

Over the past few years, IAF has been increasing its efforts to utilise certain straight stretches of National Highways for emergency landings. Such highway stretches are planned to be used in emergencies, if an active airport is not available for some reason. These operations increase the flexibility in the use of Air Power. In addition, use of transport aircraft for quick insertion of forces for Human Assistance and Disaster Relief into civil area and Special Forces in case of contingencies has been validated.

IAF had already carried out landings by fighter aircraft for the first time on the Yamuna expressway on 21 May 2015. The stretch of Agra – Lucknow expressway was earlier activated for the first time for IAF operations in November 2016 in which six fighter aircraft of the IAF landed on the expressway. However, in this exercise, IAF included the Jaguar fighter aircraft for the first time. Also for the first time, IAF’s C-130J transport aircraft participated in highway landing operations for insertion and extrication of Garud Special Forces. While the operations on 24 October 2017 required the closure of the portion of the expressway for road traffic, through the excellent support of the UP State Government and UPEIDA, once the planned works are completed, such road traffic closure will not be required henceforth. Two diversion roads on either side of the airstrip are near completion. In addition, wire fencing on both sides is also being undertaken to keep the airstrip clear of stray animals. Two parking areas for aircraft at both ends of the airstrip are also nearing completion.

Several countries like Germany, Sweden, South Korea, Taiwan, Finland, Switzerland, Poland, Singapore, Czechoslovakia, Pakistan, etc. have dedicated stretches on their highways and expressways for aircraft to land and take off in emergencies or war like events.

This operation has majorly boosted IAF’s capability to undertake unhindered operations even during non-availability of standard runways. It has demonstrated the expert flying skills of its fighter and transport aircrew, and the capability of its ground crew in activating such expressway airstrips on short notice. Such activations of highway stretches all across India are planned to be practised regularly by the IAF in future.