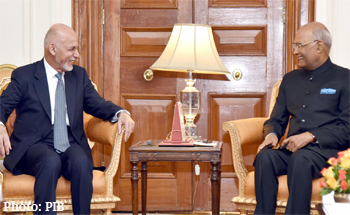 Welcoming the Afghan President to India, the President expressed admiration for the astute leadership that he has provided to Afghanistan through difficult times. He also commended Mr Ghani for strengthening bilateral relations between India and Afghanistan.

The President said that for India, Afghanistan is not just a strategic partner, but a nation that evokes endearing affection. He recalled President Ghani’s speech at the Heart of Asia Summit in Amritsar in December 2016, and his visit to the Golden Temple. He added that civilisational links and people-to-people contacts provide a strong foundation to our ever-growing friendship.

The President said that in recent times, the two countries have deepened their strategic partnership. The India-Afghanistan Trade and Investment Show in New Delhi brought our businessmen together and generated business worth over US $ 200 million.

The President expressed happiness at the opening of the air freight corridor between Kandahar and Kabul and Delhi. He also noted that the Afghan cities of Mazar-e-Sharif and Herat have been connected directly by air to Delhi.

The President said that securing sustained peace and security remain the key fundamentals in leading Afghanistan on the pathway of economic recovery and growth. Unfortunately, mindless and senseless violence is being imposed on the people of Afghanistan. President Kovind strongly condemned recent terror attacks in Afghanistan, including in the provinces of Kabul, Kandahar, Ghazni and Paktia,that have resulted in over 200 innocent people being killed.

The President said that India itself has been victim of state-sponsored, cross-border terrorism for decades. We can fully empathise with the ongoing quest of the Afghan people to secure peace. India believes that whatever initiatives are taken for bringing peace in Afghanistan should be Afghan-led and Afghan-controlled.