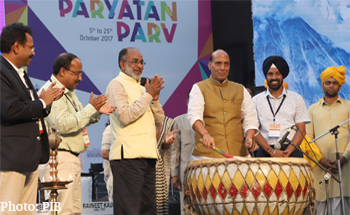 19th Day of Paryatan Parv Celebrated Across the Country

Rajnath Singh, Union Minister for Home Affairs inaugurated the “Paryatan Parv-Grand Finale” at the Rajpath Lawns, New Delhi yesterday. K.J. Alphons, Minister of State (Independent charge) for Tourism presided over the inaugural function. Ministry of Tourism in collaboration with other Central Ministries, State Governments and Stakeholders has organized “Paryatan Parv”, a nation-wide celebration of Tourism from the 5th to 25th October 2017.

Addressing on the occasion, Rajnath Singh congratulated the Ministry of Tourism for organizing such a grand event for the promotion of Tourism. He said that India is a country of unity in diversity whether it is in the field of art or music or traditions or costumes etc. If we want to make India a super power in the world then tourism can play an important role. We should collectively try for increase of share of tourism in our GDP. He said that India has culturally controlled a major part of the world. India has an ancient tradition of “Atithi Devo Bhav”. We will have to inculcate ancient traditional values in our people. He informed that the Ministry of Home Affairs has also taken several measures to promote tourism viz. e-visa given within 72 hours. So far, more than 29 lakhs tourists have availed this facility. He opined that the private sector should also be involved in the promotion of tourism.

In his address, K.J. Alphons said that the Paryatan Parv has been organized with the objective of drawing focus on the benefits of tourism, showcasing the cultural diversity of the country and reinforcing the principle of “Tourism for All”. This 21 days programme has been organized by Ministry of Tourism in collaboration with other Central Ministries, State Governments and Stakeholders. He said that India is an Incredible country and its cuisine, music, performing art and dance are unique and amazing. Also our ancient heritage sites are remarkable and now musical performances have been started at many heritage sites.

As a grand finale to the 21 day Paryatan Parv, a three day event has been organised at the Rajpath Lawns, New Delhi (between Rafi Marg and Janpath) from the 23rd to 25th October 2017. The event is open to the public from 12 noon to 10 pm on all three days and includes Cultural Performances, a Crafts Bazaar multi-cuisine Food Court and other interactive activities to keep visitors engaged at the event venue.

The Food Court has 50 stalls set up by the States / UTs each showcasing their distinctive cuisine, the National Association of Street Vendors of India (NASVI) with street food from different regions as well as by the Institutes of Hotel Management and ITDC. The Crafts Mela with 50 stalls showcases the diverse handicrafts and handlooms of the country, arranged by the State Governments and Ministry of Textiles through the Office of the Development Commissioners of Handicrafts& handlooms. There are 15 Theme State Pavilions where each State showcases its tourism products and destinations. Cultural Performances by troupes from the different States/ UTs of the country are being staged from 1:00 pm to 4:30 pm on all three days.

In addition to the cultural performances by the States/ Union Territories, special cultural eventsare being staged from 6:00 pm onwards on all three days. These include “Purani Dilli Ki Dastan” presented by Begum Zakia Zaheer, Syeda Hameed and Rene Singh today i.e. on 23rd October 2017; "Dhrupad Vocal" by Prashant & Nishant Mallick (Mallick Brothers) on 24th October 2017; and “Purab Ang Gayaki of Banaras Gharana” by Smt. Savita Devi on 25th October 2017 and choreographed cultural performances by the North Zone Cultural Centre on all three days.

Paryatan Parv has received a very enthusiastic response from other Central Ministries and State Governments, who have come forward in organizing various activities and events and based on reports received, the event which has spread to all regions of the country has been received very well and has attracted participation in large numbers.

Highlight of the Day 19 was a CEO Round Table Conference on Tourism Sector organised by Invest India under the Department of Industrial Policy & Promotion. The round table conference was very fruitful as subjects ranging from Developing India’s Tourism Infrastructure through Public-Private Partnership, Helping India become the preferred MICE destination of the world, Tapping India’s Niche Tourism Potential to Game Changers - Startups and Online Travel Aggregators were discussed in detail. Participation of various State Governments, Organizations, Stakeholders and Private entrepreneur ensured that the event yielded the desired outcome.

Delhi also witnessed various other activities such as a National Seminar on “Sustainable Tourism” organised by NCERT, All Women Ceramic Workshop “Sita : The Daughter of Earth Goddess” was organised by Lalit Kala Akademi, a Workshop on Responsible & Rural Tourism was organised by India Tourism Delhi

Ministry of DONER in association with the State Government of Manipur has organised several programmes such as a Cultural Evening, Illumination of Kangla Fort, Workshop on “Tourism and its Challenges in Manipur”, Workshop on “Promotion of Homestays and Livelihoods in Manipur”, Competition on concept presentation on “Destination Marketing in Manipur”. These programmes were organised at Imphal. At Tawang a Sensitization programme and Guided walk around the Tawang Monastry was organised in collaboration with State Government of Arunachal Pradesh
Ministry of Rural Development has Launched of Tourism Projects in Shamlaji Cluster for Development of Meshwo river bank with tourist infrastructure and recreational facilities.

A Rafting expedition was arranged by State Government of Uttarkhand at Shivpuri.

The State Government of Uttar Pradesh has organised a Cultural programme at Chitrakoot. A Workshops on Legal and regulatory aspect of tourism and West Asia &Tourism was organised in Aligarh Muslim University, Seminar on “Changing Paradigms in Indian Tourism Challenges for Growth and Sustainability” was organised in University of Allahabad.

The State Government of Madhya Pradesh in association with India Tourism has organised Sensitization Programmes for Guides , Police and Taxi Drivers at Khajuraho.

The State Government of Maharashtra has organised Spot Quizzes at tourist places, airports, railway stations, bus stations, across the state.

A Cultural and Food Festival was organised by Indiatourism Kolkata in association with the State Government, a Sensitisation Programme for boatmen, auto drivers was also organised at Sundarbans.
India Tourism Guwahati in association with State Government of Assam, NETDC and FINER has organised a mela Showcasing Indian Cuisine, Culture, Handloom, Handicrafts at Brindaban Garden, Guwahati.

The State Government of Kerala has organised Cycle Rally, Seminar and Cultural Show including Kalaripayattu & Dance at Kochi