It is the duty of every person in the country to provide our children the opportunity and experience of being citizens of a better India, says President 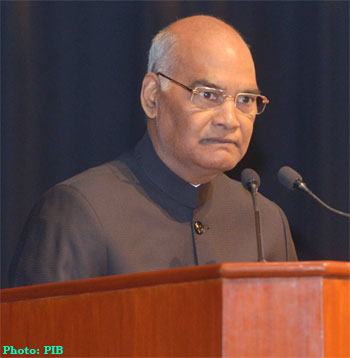 The President of India, Ram Nath Kovind, graced and addressed the closing ceremony of the Bharat Yatra for a ‘Surakshit Bachpan-Surakshit Bharat’ being organised by Kailash Satyarthi Children’s Foundation at Rashtrapati Bhavan (October 16, 2017).

Speaking on the occasion, the President said that he believed that even if one child is unsafe, all society is guilty. Therefore, this Yatra for a ‘Surakshit Bachpan-Surakshit Bharat’ is a big step towards providing a safe environment for children in our nation. It is the duty of every person in the country to connect with the objectives of this Yatra and provide our children the opportunity and experience of being citizens of a better India.

The President said that Shri Kailash Satyarthi has been contributing towards the cause of human rights of children for almost 40 years. He said he had been made aware that more than 85,000 children have been rescued from atrocities by the efforts of Shri Satyarthi. They have received educational opportunities and have been helped to start their lives afresh.

The President said that there are policies and laws to ensure the rights of children in our country. However, these rights can only be ensured through the awareness and sensitivity of the entire society. Millions of people, from south to north, have been made aware of this issue through this Bharat Yatra.

The President said the country must come together to ensure every child receives education and achieves his or her full potential with freedom and dignity, while being healthy and secure. Shri Kailash Satyarthi’s Foundation is always striving to achieve these objectives. He appreciated the Foundation and all those associated with it. He hoped that together we would build an India where there will be no scope for sexual abuse and human trafficking of children.

Speaking on the occasion, Nobel Prize Laureate Shri Kailash Satyarthi said the Bharat Yatra for ‘Surakshit Bachpan-Surakshti Bharat’ was a non-violent war on sexual abuse, rape and trafficking of children. He said that the voices of children cannot be silent any more. On Diwali this year, he urged all to light a lamp in the name of protection of children.

On the occasion, the President also lit a symbolic Diya – ‘Bal Suraksha Jyoti’. A photo exhibition was hosted at the venue and a short film that provided a glimpse of the Bharat Yatra was also screened.