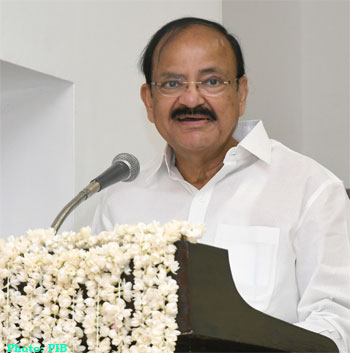 The Vice President of India, M. Venkaiah Naidu has said that Optimism and creativity, Resilience and self-control, Integrity and self confidence are the required to become successful. He was addressing the gathering after giving away Magudam Awards constituted by News18 Tamil Nadu, for the best and the brightest from Tamil Nadu in various fields, in Chennai today. The Governor of Tamil Nadu, Shri Banwarilal Purohit, the Chief Minister of Puducherry, Shri V. Narayanasamy, the Deputy Chief Minister of Tamil Nadu, Shri O. Panneerselvam and other dignitaries were present on the occasion.

The Vice President said that Tamil Nadu is home to an ancient and unique civilization that has allowed performing arts, sculptures, paintings, writing and trade to flourish over centuries. He further said that success is the consequence of passion, tenacity and unending labour. Wealth, fame and glory are only the consequences of success.

The Vice President expressed his happiness over giving away ‘MAGUDAM AWARDS’ to people from Tamil Nadu who have excelled in the field of Sports, Entertainment, Public Service, Literature, Technology and Start-Ups.

"Vanakkam to my esteemed friends in this august gathering. We are here today to honour the best and the brightest from Tamil Nadu in various fields. Be it sports, arts and literature, social service, business or any other profession, Tamilians have been at the forefront of nation building, powering India ahead to the next generation of global super powers.

Tamil Nadu has always been at the forefront of India’s economic growth since before Independence, contributing in large part to the GDP of the country. With a Rs 13.39 lakh crore economy, Tamil Nadu is among the top states that contribute in large measure to the Indian exchequer. The state is currently growing at the rate of 7.49 per cent and is projected to shoot up to 9 per cent growth next year.

And all of this is thanks to the seven crore Tamilians who live and work not only in the state but also across the country and the world.

Tamilians are hard workers and innovators as is evident from many of the well known and well respected guests in this gathering. They have made their mark in the world – from Google CEO Sundar Pichai, a Chennaiite – to musical genius AR Rahman, film producer Ashok Amritraj and film director Manoj ‘Night’ Shyamalan, to name a few.

With a rich cultural heritage – from the wisdom of Tiruvalluvar to the temples of Madurai, the dargahs and mosques of Ramanathapuram, the churches and chapels of Kanyakumari, Tamil Nadu is home to an ancient and unique civilisation that has allowed performing arts, sculptures, paintings, writing and trade to flourish over centuries.

It is in this context that I am here today, speaking at News18 Tamil Nadu’s very first Magudam Awards. Magudam in Tamil, means ‘crown’ and it is apt that this award is named so, because all of the winners are kings and queens in their own right.

News18 Tamil Nadu’s Magudam Awards honours the hard work and determination that goes into achieving success against all odds in the six categories – sports, cinema, social service, business and entrepreneurship, science and technology as well as arts and literature. Apart from these, today we will also honour one person for a lifetime of achievement.

Today, brothers and sisters, is a celebration of success. As the great Tamil poet Tiruvalluvar said – “When the rare chance comes, seize it,To do the rare deed.”

There are such rare persons in our midst today who have seized that rare chance to do the rare deed and they have succeeded, thanks to grit, determination and unflinching passion in the face of enormous obstacles.

What defines success? Is it wealth? Is it fame? Is it glory? Success is the consequence of passion, tenacity and unending labour. Wealth, fame and glory are only the consequences of success.

Take for instance the nominees in each category today. Each and every one of them have succeeded due to these same qualities – passion for their chosen profession, tenacity to fight against poverty and all odds and unending labour.

In the business category for example – and I am only citing a few names, since time is short – concepts like Bharat Matrimony, Fresh Desk and Washapp – these have become success stories thanks to a novel idea implemented with dedication and fervour.

A wonderful helping heart in Madurai, Gandhimathiammal, who has taken it upon herself to feed street dwellers every day… Gunasekaran of Coimbatore who takes art to poor students and helps enrich their lives… Arivuchudar Tuition Centre of Villupuram which has brought quality education to hundreds of poor students in rural areas… these are the fruits of passion and we are here today to honour some among the many of these wonderful p

India is also at the forefront of science and technology, competing on par with global powers and those like Subbaiah Arunan, the brain behinf the Mars Mission, have helped put India there. Whether it is finding a cure for the Hepatitis B virus, as Professor SP Thyagarajan has done or innovating to reduce e-waste, as IIT Madras’ Indhumathi Nambi and Praveena Gangadharan have shown, we are indeed on the path to winning greater laurels globally.

As for the sporting arena, Indians are increasingly posing great challenges to world champions. Tamilians have a special role to play – the young Mariappan Thangavelu who has won laurels for the country in the 2016 Rio Paralympics, basketball player Anitha and cricketer Washington Sundar are some of the rising stars of next generation sportspersons who, I am sure, will do the nation proud in the near future.

Tamil Nadu loves its cinema – in fact cinema is an integral part of life and politics in the state. All of the Chief Ministers – like Mr MG Ramachandran, Mr M Karunanidhi and the late Ms Jayalalithaa have all come from the cine field. What would Indian cinema be without Nadigar Thilagam Sivaji Ganesan and Superstar Rajinikanth?

Tamil cinema is also at the forefront of innovation, experimentation and conscience. By conscience, I mean that the Tamil films being made by the bold new young directors, are intertwined with social messages, daring to choose realism and art and yet managing to churn out commercial successes.

Young director Manikandan’s “Kaaka Muttai” is a work of art on the life of children in the slums of Chennai. Extraordinary young talents such as actors Shivatha, Aishwarya Rajesh and Vijay Sethupathi make rustic Tamil characters come alive and sparkle on the big screen. Director Seenu Ramasamy, the very young Karthik Naren who delivered a blockbuster hit on his first attempt in “Dhuruvangal Pathinaaru” as well as the stars who have already ascended and remain at the top – Dhanush and Sathyaraj – the Tamil cine world has no dearth of talent.

Nasar, the winner of the Magudam Lifetime Achievement Award, is one of the greatest character actors of all time as well as a director, singer and lyricist. He followed his passion to become an actor, and has featured in over 300 films, including in Baahubali.

In the field of arts and literature, names such as Tho Paramasivan are well known – his research and deep knowledge of ancient Tamil culture and the magic wielded by his pen need no introduction. While Tho Pa engages with the written word, others like RP Amudhan wield the camera and the microphone, telling truth equally powerfully.

There is one common thread amongst all of these people gathered here today. They are all successes in their own right and the reasons are obvious.
The key characteristics of successful people has been researched across the world and across the centuries – simply because everybody wants to be a success of course! Let me list out a few key characteristics of successful people.

Optimism and creativity are what sets successful people apart from the average person. A negative attitude and approach to any endeavour can only guarantee failure. Similarly, doing things by the book is good, but innovating and using one’s creativity will set one apart from the rest.

Resilience and self-control are the other two qualities that are cultivated by highly successful people. Resilience is to plod on despite adversities, despite challenges, and to take an obstacle and turn it into an advantage. Self-control is crucial in order to ensure that we are unswerving from our chosen path and ensures complete focus on our goals.

Integrity and self confidence are the final two aspects of successful people that I would like to touch upon today. Short cuts can never ensure success. It is only reliability, honesty and credibility that can put one on the path to success. When we maintain our integrity, we show our peers that we are self confident and that nothing can bring us down. We show our clients and our bosses and the people we interact with that we have unimpeachable values. We show them that we are self made and independent.

And these, ladies and gentlemen, are the set of qualities that run as a common thread amongst the gathering in this hall.

(Let the mind be firm
Let the speech be sweet
Let the thoughts be noble
Let one attain what’s dear
Let all dreams come true
And quickly, too
Let there be wealth and happiness
And fame in this world
Let the eyes be open
Let one be determined in achieving one’s goals
Let women attain freedom
Let God protect us all
Let the land be fertile
Let us feel the heaven here
Let the Truth prevail)
Thank you very much and let us now honour the winners of News18 Tamil Nadu’s Magudam Awards.
Nandri Vanakkam.