Advance bookings in many countries for 'Golmaal Again' 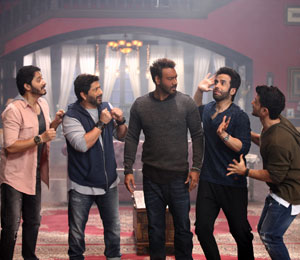 This Diwali, 'Golmaal Again' is all set to spread magic among film enthusiasts in India and across the world. 'Golmaal Again' is poised for the widest release for the franchise. Interestingly, we hear that bookings for the Rohit Shetty film started a month in advance in Pakistan and Middle East.

Apart from traditional overseas territories like the US, UK and the Middle East, the entertainer, starring Ajay Devgn, Parineeti Chopra, Tabu, Tusshar, Arshad Warsi, Shreyas Talpade and Kunal Kemmu, is also releasing in Portugal, Peru, Japan, Ukraine and Panama, marking a first for the franchise.

Highly promoted in the Diwali extravaganza in North America, the movie will enjoy the biggest ever release of the franchise there.