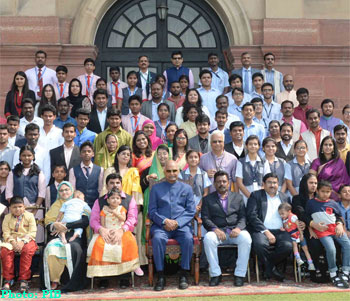 Speaking on the occasion, the President said that Dr Kalam is one of the greatest personalities ever. He said that he saluted Dr Kalam and his monumental achievements as a scientist, a scholar and as the President of India. One of the best ways of building the character of the youth of any country is to inspire them to read biographies of great personalities.

The President said that Dr Kalam was one of India’s greatest visionaries and is fondly remembered as ‘The Missile Man of India’ and ‘People’s President’. He has made momentous contribution to India’s scientific heritage through his involvement in varied fields ranging from nuclear technology to designing low cost stents for the heart or lightweight calipers for polio victims. India will never forget the remarkable contributions of Dr Kalam. He had a great passion for teaching and education and truly ignited young minds with the power to think and innovate. He enjoyed being with people. He was adored by people and youngsters. He loved students and spent his final moments among them.

The President said that the Dr Kalam Sandesh Vahini bus presents the life story of Dr Kalam in a very interesting manner. He appreciated the effort. He said he was sure that a large number of Indians, especially the young people have benefited by seeing the mobile exhibition on the life, works and the vision of Dr Kalam.

The Kalam Sandesh Vahini was launched by House of Kalam and Chinmaya University. The Vahini depicts various incidents from Dr Kalam’s life as well as key highlights of India’s scientific achievements, with an aim to educate and inspire the masses. It was flagged off by Prime Minister, Shri Narendra Modi from Rameswaram on July 27, 2017, during the inauguration ceremony of Dr Kalam’s memorial. The Vahini has travelled from Rameswaram, through various states, to finally arrive at Rashtrapati Bhavan in New Delhi.