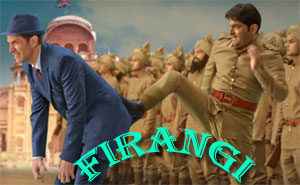 Mumbai: Having garnered immense appreciation for his debut in Kis Kisko Pyar Karoon, ace comedian Kapil Sharma is back with a bang. He will be seen in the upcoming film Firangi in yet another comical avatar.

The makers of the film released the motion poster and it will definitely tickle your funny bone. Watching Kapil Sharma kick some ass only makes the audience look forward to know what Firangi is all about.

After a motion poster this hilarious, we’re sure that fans can’t wait to see what Kapil Sharma has in store for them!

Founded in 2016 as a film production house, K9 Films (K9) is owned by the renowned actor and stand-up comedian of the industry Kapil Sharma. He is currently among the top celebrities of the industry. Under his banner, he has already produced the top rated shows ‘Comedy nights with Kapil’ & ‘The Kapil Sharma Show’. At K9, our aim is to capture audiences all over the world and serve them with an experience to cherish.

Put your hands together as we are coming up with our first film 'Firangi' releasing on 24th November, 2017.