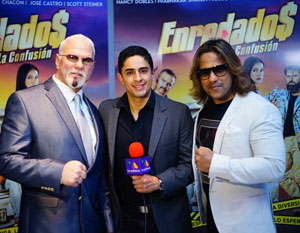 Mumbai: After winning hearts of audiences around the world, Prabhakar Sharan is all set to release his film 1 Chor 2 Mastikhor(Enredados: La Confusion) in Hindi and Bhojpuri for the Indian audiences.The film features Prabhakar Sharan in the lead role alongside Scott Styner, the Former Wrestling World Champion.

Money or love is the dilemma of Leo, who in the midst of a millionaire robbery knows the love of his life, the beautiful Ana. But the confusion that causes an accident gives an unexpected twist to the story, Leo will prefer love but at the cost of facing risky and fun situations leaving the viewer with doubts and confusion about the whereabouts of the money. The best part of the film is watching Scott Styner talking in Bhojpuri. The trailer of "1 Chor 2 Mastikhor" proves that the film will be a treat for the youth as well as the family audience.

The script was written by Prabhakar Sharan, while the direction was given by the renowned Hindu filmmaker Ashish R. Mohan, who in 2012 won the Bollywood blockbuster comedy-action film Khiladi 786. The production of the film lasted approximately nine months and took place in different locations in Costa Rica, involving technicians from Panama, Guatemala, Costa Rica, Colombia and Argentina.

While the post-production of the film was made in India and Los Angeles in the USA, using the best technology for a final product of high quality, which is noted for the work of official advances.