Medical fraternity should provide healthcare to masses at an affordable and reasonable cost: Vice President 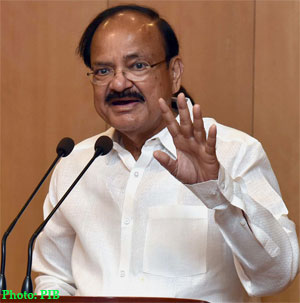 The Vice President of India, M. Venkaiah Naidu has said that the medical fraternity to treat their profession as a mission to provide healthcare to the masses at an affordable and reasonable cost. He was addressing the gathering after releasing two books titled ‘Minimally Invasive GI Cancer Surgery’ authored by renowned laparoscopic surgeon, Dr. C. Palanivelu and ‘Bariatric Surgical Practice Guide’, edited by Dr. P. Praveen Raj, here today.

The Vice President said that medical profession was a noble profession and keep that in mind and treat this as a mission. He further said that people consider a doctor to be next to God. He exhorted the medical fraternity to adopt a humanitarian approach while providing medical care to people.

The Vice President said that the doctors should educate and sensitize the people about the dangers of leading a sedentary lifestyle and eating junk food. He further said that health experts opine that the prevalence of non-communicable diseases, including cancers and cardiovascular diseases will increase while those of the communicable diseases will decrease in the coming years. Modern lifestyle, diet and genetic predisposition are believed to be among the major contributing factors for this trend, he added.

The Vice President said that among cancers, the GI cancers involving digestive organs such as esophagus, stomach, liver, pancreas, lungs, large intestine and rectum, constitute 60 per cent. He further said that the incidence of GI cancers is increasing alarmingly due to fast foods, smoking, alcohol and life style changes. He expressed concern that obesity was reaching alarming proportions and that youngsters were getting affected by GI cancers.

He Vice President said that India was once known as ‘Vishwaguru’ and showed the path to the rest of the world. He further said that today again it was becoming a medical tourism hub with people from different countries coming here for treatment.

The Vice President congratulated Dr. Palanivelu for applying laparoscopic surgery for all types of surgeries, including cancer surgery and expressed the hope that the book written by him would go a long way in promoting minimally invasive surgery for GI cancers.