Yoga is the Mother of all Exercises: Vice President of India 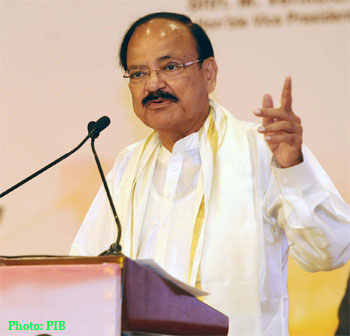 The Vice President of India, M. Venkaiah Naidu has said that Yoga is the Mother of all Exercises. He was addressing the inaugural session of the 3rd International Yoga Conference, here yesterday. The Minister of State for AYUSH (Independent Charge), Shri Shripad Yesso Naik and other dignitaries were present on the occasion.

The Vice President said that the ancient science of Yoga is India's invaluable gift to the modern world. He further said that we believe that knowledge and science should be transmitted freely for the welfare of the entire world. “Sarve Janaah Sukhino Bhavantu” has been our fervent prayer from time immemorial, he added.

The Vice President said that Yoga goes beyond the physical exercises and connects the body with thought processes. He further said that Yoga has nothing to do with religion, as some people unfortunately attribute religious overtones to this ancient scientific system. It is a science of well being that needs to be studied and practiced just as any other medical system, he added.

The Vice President said that Yoga should become a part and parcel of our daily routine to combat the modern-day health problems, both physical and mental. He further said that Yoga aims to help us to achieve a state of equilibrium when we are at peace with ourselves so that we can create a peaceful environment.

The Vice President appreciated the efforts of the people like Baba Ram Dev who made Yoga to reach every house simply by explaining what Yoga is.

“I am extremely pleased to inaugurate this two-day international Conference on ‘Yoga and Wellness' organized by the Ministry of AYUSH.

I am glad that a large number of delegates from more than 44 countries around the world are attending this conference.

Yoga is the Mother of all Exercises.

The theme of the conference is very much relevant and timely. It provides an opportunity to deepen our understanding of the ancient science of yoga and the possible ways in which this knowledge can be applied to make our contemporary lives better, healthier and happier.

The conference will be focusing on seeking solutions to contemporary problems by utilizing the insights of ancient scientists. A quick glance at the topics being covered in this conference shows the potential pathway to wellness that yoga may offer to a population suffering because of modern, stress-filled lifestyles.

‘Yoga and Depression', ‘Yoga and Cardiovascular Diseases', ‘Yoga and Cancer Control', ‘Yoga and Pain Management', ‘Yoga for Women; Case Studies on Gynecological Disorders'—these are the topics of the technical sessions for papers presentation by experts, followed by a panel discussion.

What does the wide range of the topics indicate? It indeed shows the all-pervasive and positive role yoga can play in management and control of different ailments. Friends, I need not elaborate to this erudite audience about the ill-effects of the many problems like pollution plaguing the modern society. For instance, studies have shown that yoga helps in improving pulmonary function in patients suffering from bronchial asthma.

The ancient science of Yoga is India's invaluable gift to the modern world. Thanks to the Prime Minister, Shri Narendra Modi, the United Nations declared June 21 as the International Yoga Day and is now being celebrated across the globe. The ancient science has been practiced in India and many countries around the world for a number of years. What the declaration of June 21 as International Day of yoga will do is to enable a greater number of persons to benefit from this holistic science. We, in India, believe that knowledge and science should be transmitted freely for the welfare of the entire world. “Sarve Janaah Sukhino Bhavantu” has been our fervent prayer from time immemorial.

Yoga is a holistic science embodying the basic principle of organic, interconnectedness of different facets of life. It is not a mere set of exercises. It goes beyond the physical exercises and connects the body with thought processes. It seeks to build a lifestyle that values calmness, harmony and positive thinking. It is probably one of the most effective therapies for many psycho-somatic disorders.

As has been rightly mentioned, Yoga adopts a holistic approach towards health and well-being. While Yoga has nothing to do with religion, some people unfortunately attribute religious overtones to this ancient scientific system. It is a science of well being that needs to be studied and practiced just as any other medical system. This is precisely the objective of conferences like the one we are having here today. More research needs to be done to take this science forward so that the world population benefits from this treasury of knowledge and wisdom.

Yoga should become a part and parcel of our daily routine to combat the modern-day health problems, both physical and mental. There is also a misconception that Yoga is only a sort of physical exercise meant to help the fitness of an individual. Nothing could be farther than this. It is a holistic system where the mind and body act in unison and get completely rejuvenated as physical postures, breathing exercises and meditation help in overall well-being of an individual. And of course Yoga also helps in the spiritual quest of an individual through understanding of the inner Self and achieving complete peace with the surroundings.

In fact, there are different dimensions of yoga and we find them elaborated in the Yoga Sutras of Patanjali and other treatises including the timeless classic, Bhagavad-Gita. Samatvam Yoga Uchyate (समत्वंयोगउच्यते). “That is Yoga, which is based on Samatva, calmness, balance”. When there is imbalance within the body or the mind, we don't feel well. We cannot do our best. Yoga believes that this balance has to be restored to achieve wellness and total well being.

Yoga aims to help us to achieve a state of equilibrium when we are at peace with ourselves so that we can create a peaceful environment around us. We are at harmony with our surroundings, with our fellow human beings, with nature and environment. Yoga systems recognize that the training of the body is the first important step towards achieving this goal. The ancient yogic scientists emphasized the fundamental importance of being in good physical health. They said: “Shariramaadyam Khalu Dharma Saadhanam” meaning “A healthy body is the first step towards achieving whatever one aspires for”.

While, yoga is an integral part of ‘Health and Physical Education' in India, it is also gaining increasing popularity in schools in the United States and has been introduced in schools in the UK and Australia because of its positive effects on concentration levels and emotional balance, among others.

Many more systematic efforts to spread the knowledge are called for.

I am sure this two-day conference will give an impetus to the wider dissemination of the scientific principles underlying yoga. I do hope that the scientific and medical fraternity will establish empirically the connection between yoga and wellness. That would, indeed, be the foundation for a healthy, harmonious sustainable world. Your efforts will hopefully be successful I wish that this Conference become a grand success.

I appreciate the efforts of the people like Baba Ram Dev. He made Yoga to reach every house. That is the greatness of that individual. He made this herculean task simply by explaining what Yoga is and how it helps you lead a better life. Once he organized a Yoga camp in my place, Nellore town. He invited me to the Yoga demonstration at 5.30 in the morning. When we reached the venue next morning, I was surprised to see the ground was full of about 30 thousand Yoga enthusiasts, who gathered there to practice Yoga. Such was the impact of Baba Ram Dev.

Many more great people have done great things. We have seen now, Swami Maheshwarananda ji living in a country like Austria, propagating Yoga and also Dr. Chris Streeter teaching Yoga in US Boston University, and catching up everywhere.

I wish to end with the prayer from the Upanishads that is a prayer for happiness, good health and positive thoughts.

“Let everyone be happy, free from illness, see goodness everywhere and not be sorrowful”.

I wish you all the very best in your deliberations and future work.