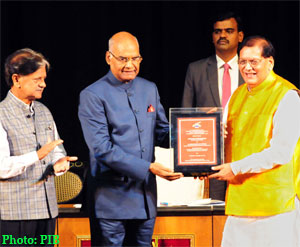 The President of India, Ram Nath Kovind, presented the Lal Bahadur Shastri National Award for Excellence in Public Administration, Academics and Management for the year 2017 to Dr. Bindeshwar Pathak at Rashtrapati Bhavan (October 10, 2017).

Speaking on the occasion, the President said that the occasion revived memories of our former Prime Minister, Shri Lal Bahadur Shastri. He was an exceptional leader who believed in simple living and gave the slogan ‘Jai Jawan Jai Kisan’. He said that Dr. Bindeshwar Pathak was the most deserving person for an award named after Shri Shastri as he has contributed immensely in the direction of getting rid of the practice of manual scavenging. The Mayor of New York had declared April 14, 2016 as the ‘Dr. Bindeshwar Pathak International Day’ keeping in mind this contribution made by Dr. Pathak. He also received the Padma Bhushan in 1991.

The President said that Dr. Bindeshwar Pathak has contributed to making revolutionary changes in society and has put into practice the ideals of Mahatma Gandhi, Baba Saheb Ambedkar and Lal Bahadur Shastri He also complimented the Lal Bahadur Shastri Institute of Management for honouring people who have made such valuable contributions.

The Lal Bahadur Shastri Institute of Management, set up in Delhi in 1995, has instituted the Lal Bahadur Shastri National Award for Excellence in Public Administration, Academics and Management. Each year, the award honours an Indian who is an exceptionally outstanding and distinguished business leader, management practitioner, public administrator, educator or institution builder for his/her sustained individual contributions and achievements.

Dr. Bindeshwar Pathak is the founder of Sulabh International and has developed and implemented, on a pan India scale, a low cost and appropriate toilet technology popularly known as the Sulabh Shauchalaya system.