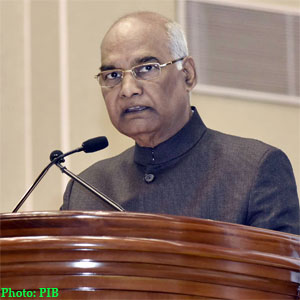 The President of India, Ram Nath Kovind, presented the Vayoshreshtha Samman - a scheme of National Awards for senior citizens yesterday (October 9, 2017) at a function held in New Delhi.

Speaking on the occasion, the President said that there is a healthy tradition of respecting and taking care of elders in our country. He added according to the last census, the population of senior citizens in our country was approximately 10.5 crore, which was about 8.5% of our total population. The average life expectancy has increased in recent decades due to improvement in health services and other reasons. It is estimated that by the year 2050, the number of senior citizens will be approximately 19% of our total population.

The President said that he was happy to note that the Government of India has taken several steps for the welfare of elderly persons. These include the National Programme for Healthcare of the Elderly wherein specialised services will be provided for their treatment. Under the National Health Insurance Scheme implemented with the help of State Governments, additional health insurance is being provided.