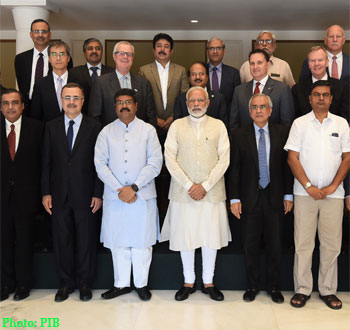 The Prime Minister, Narendra Modi, yesterday interacted with oil and gas CEOs and experts from across the world.

The meeting was coordinated by the NITI Aayog. In their brief opening remarks, Minister for Petroleum and Natural Gas, Shri Dharmendra Pradhan, and Shri Rajiv Kumar, Vice Chairman NITI Aayog gave an overview of the work done in this sector. They also emphasized the expected growth in energy demand in India, and the significant progress made in electrification and LPG expansion.

In a short presentation, CEO, NITI Aayog, Shri Amitabh Kant outlined the recent developments and challenges in the oil and gas sector in India.

Various participants appreciated the progress and reforms made in India in the last three years. Participants appreciated the pace and drive with which Prime Minister Modi has brought about reform in the energy sector. Subjects such as the need for a unified energy policy, contract frameworks and arrangements, requirement of seismic data sets, encouragement for biofuels, improving gas supply, setting up of a gas hub, and regulatory issues came up for discussion. Many participants strongly recommended the inclusion of gas and electricity in the GST framework. The Revenue Secretary, Shri Hasmukh Adhia, highlighted the recent decisions of the GST Council regarding the oil and gas sector.

The Prime Minister thanked all participants for sharing holistic suggestions, keeping in mind India's unique potential and requirements in the oil and gas sector, instead of merely confining themselves to the concerns of their respective organisations.

The Prime Minister observed that the suggestions made today covered policy, administrative as well as regulatory issues.

The Prime Minister thanked the President of Russia, Vladimir Putin, and Rosneft, for their commitments and support to the energy sector in India. He appreciated the 2030 vision document of the Kingdom of Saudi Arabia. Warmly recalling his visit to Saudi Arabia, he said many progressive decisions are being taken there in the energy sector. He looked forward to various opportunities for cooperation between India and Saudi Arabia in the near future.

The Prime Minister said that the status of the energy sector in India is highly uneven. He welcomed the suggestion made for a comprehensive energy policy. He stressed on the need to develop energy infrastructure and access to energy in Eastern India. He flagged the potential of biomass energy and also invited participation and joint ventures in coal gasification. He welcomed all possibilities for innovation and research in the oil and gas sector.

The Prime Minister indicated that as India moves towards a cleaner and more fuel-efficient economy, he also wants its benefits to expand horizontally to all sections of the society, and in particular to the poorest.