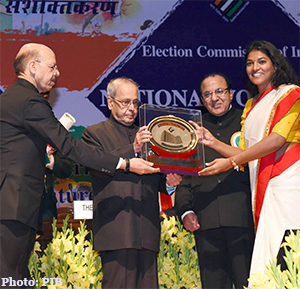 The President of India, Pranab Mukherjee said that there has been some talk about simultaneous elections to the Lok Sabha and State Assemblies in political circles. If initiative is taken by Election Commission and political parties arrive at a consensus, reform is possible. He said such a move can reduce inconvenience in terms of expenditure and management. The President said this while speaking at the 7th National Voters' Day Celebrations here today.

Pointing out that in the last General Elections in 2014, over 66% of the total electorate of 834 million voted, the President congratulated the Election Commission on the successful conduct of this huge exercise. He also congratulated Indian voters for exercising their right to vote and showing utmost maturity in doing so.

The President said he was confident the Election Commission can maintain its existing standards and continues to improvise and evolve. The Election Commission has made a unique contribution to strengthening the bedrock of Indian democracy. We can take legitimate pride in the fact that we are the largest democracy in the world.

In his address , Dr Nasim Zaidi , the Chief Election Commissioner (CEC) said that the Election Commission will lay special focus on Future Voters under Systematic Voter Education Programme in the year 2017 and onward. Dr Zaidi hoped that the first time and future voters will get encouraged to be part of electoral process. In India, over 62 million persons fall in the age group of 15 to 17 years and have been coined as future voters. Every year, 20 million persons out of the future voters turn 18 to become first time voters, Dr Zaidi added. Considering Future voters as a focus group , the CEC said that the Commission has launched a unique programme this month called “Interactive School Engagement” . As on date 11,000 schools and 23 lakh student across the country have been covered under this engagement.

Listing out several initiatives taken by the Commission during 2016 , Dr Zaidi said the Commission reignited public and political debate on the issue of long pending electoral reforms by releasing in public domain, a compendium of all pending reform proposals. First ever global conference on voter education was organised where New Delhi Declaration on voter education was released and a Voter Information Communication and Education Net or VOICE.Net was launched.

Dr Zaidi congratulated young and future voters, all officers and other organizations who received national awards for outstanding and successful management and contribution to the elections in 2016. The CEC also mention special contribution of Shri SK Mendiratta , Legal Advisor of ECI for rendering exceptional services over 53 years. This year the Commission also recognized the honorary work being carried out by four professors from premier IITs and working with the Commission under the banner of Technical Evaluation Committee, the CEC added.

The Chief Election Commissioner released the book “ Unfolding Indian Elections- Journey of living democracy” and presented first copy to the President . This book has been brought out by the Election Commission of India and Publication Division , Ministry of Information & Broadcasting.