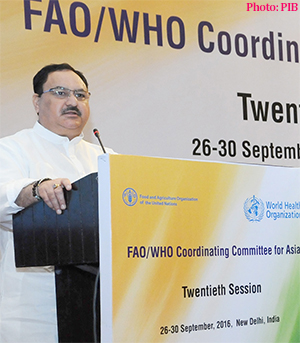 "India is committed to adhering to international food safety standards." This was stated by Shri J P Nadda, Union Minister of Health and Family Welfare at the inauguration of the 20th Session of the WHO/FAO Coordinating Committee of Asia (CCASIA), here yesterday. He further added that there is a need for CCASIA to focus on standardization of foods/cuisines of Asian origin and popularize them internationally and facilitate their global trade.

Speaking at the event, Shri Nadda stated that CCAsia should work on the communication strategy and standardisation of processes, which shall be the contribution to Codex. There is an urgent need for enhancing awareness about the work of Codex in different countries and amongst key stakeholders, he noted. “The benefits of the work done by Codex Alimentarius could be further spread among all countries, especially in the developing countries that comprise almost 70% of the world population,” the Health Minister added.

Shri Nadda also highlighted the need for capacity building among the Asian countries. “There is a felt need for more coordinated action in the region on food standard related areas,” said Shri Nadda while underscoring the need for the Codex member countries to pool their resources and provide support to least developed countries in the region.

The Health Minister further mentioned that Codex has developed important standards and guidelines for different categories of food, national standards need to be harmonised with those of Codex to achieve an appropriate level of human health protection and fair practices in international trade. “We, in India, have already embarked on this harmonization process,” The Health Minister elaborated.

Addressing the participants, Shri Faggan Singh Kulaste, Minister of State for Health and Family Welfare said that it is imperative to lay down standards for food so that the food safety is ensured and the difficulties in trade of safe food are eliminated. Appreciating the work done by Codex Shri Faggan Singh further stated that the standards developed by Codex are accepted worldwide as these are science based and developed in an inclusive and transparent manner. “In essence, the Codex Alimentarius has reached every continent, and its contribution to the protection of public health and fair trade practices is immeasurable,” Shri Faggan Singh added.

Also present at the function were members of the food sector fraternity including the science community, industry and industry associations, consumer and citizen organizations, international organizations and foreign missions, experts and government officials from Central ministries and States and other key stakeholders.