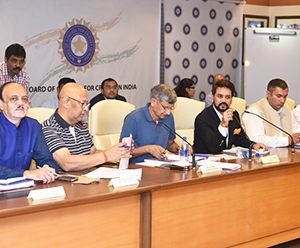 The 87th Annual General Meeting of the Board of Control for Cricket in India (BCCI) was held on Wednesday at the BCCI headquarters, Mumbai.

“The 87th AGM of the BCCI is being held today 21st September 2016 and the proceedings are being conducted for the compliance of statutory provisions under which the BCCI is constituted and also for ensuring that the day to day operations of the BCCI are not hampered particularly in view of the ongoing major national and international tournaments, commitments and is subject to the orders of the Hon’ble Supreme Court.”

The following decisions were taken in the meeting -

2. Mr. Ajay Shirke was unanimously elected as the Hony. Secretary of the BCCI for the remaining part of the term.

3. The All-India Senior Selection Committee (Men & Women) is as following -

4. The Working Committee, Standing Committee and Special Committees elected in 2015-16 were continued with vacancies being filled where necessary.

5. As the term of Justice AP Shah, Ombudsman, appointed at the last AGM has come to an end, the House authorized the President and Hony. Secretary to appoint Ombudsman for the year 2016-17.

Mr. Sharad Pawar was nominated as the alternate director for ICC meetings.

Mr. Ajay Shirke, Hony. Secretary – BCCI, will represent BCCI in the CEC meeting of the ICC.

8. The emergent Special General Meeting of the BCCI will be held on 30th September 2016 at 11 AM IST at the BCCI headquarters, Mumbai to consider the amendments to the rules and regulations of BCCI as recommended by Hon’ble Justice Lodha Committee.