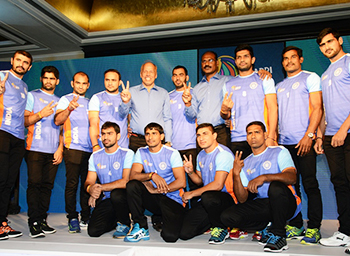 This is India's Dream Team because in every playing position India has an immensely talented player. Manjeet Chhillar is a giant of the sport and perhaps the world's best defender. Anup Kumar is unparalleled whether as a raider or as a captain with an uncanny knack of assessing match situations and turning it in the team's favour. On the other hand, there are dynamic young players like Rahul Chaudhari and Pardeep Narwal who can single-handedly win matches with their performances. This has been proven time and again in Star Sports Pro Kabaddi League. Anup Kumar walked away with the Most Valuable Player award in Season 1, Manjeet Chhillar in Season 2, and Pardeep Narwal in Season 4. Rahul Chaudhari has won the Best Raider Award in Season 1 and 4. With this strong squad, it will be a chance for the Indian team to put up a stellar show during the 2016 Kabaddi World Cup.

Commenting on the occasion Mr. Janardhan Singh Gehlot, President International Kabaddi Federation (IKF) said “The 2016 Kabaddi World Cup marks a pioneering moment in the history of Kabaddi. World class teams will play in a world class arena and will be seen across the world by fans through world class television coverage. We are committed to nurturing the sport across the globe. We are delighted and proud to host teams from all 5 Olympic geographies.”

Talking about India Dream Team, Dr. Mrs. Mridul Bhadauria, President, Amateur Kabaddi Federation of India (AKFI) said, “The team that we have in front of us today represents the best players from India in the world of Kabaddi. It is truly an India Dream Team. AKFI is fully committed to IKF's objectives towards the growth of Kabaddi as a truly global sport and the 2016 Kabaddi World Cup will be an important platform where the Indian team will give its absolute best!”

Balwan Singh, National Coach, Indian Kabaddi Team said, “The training camp hosted in Ahmedabad involved rigorous training that helped us select the right set of players for the Indian squad. Our aim is to have a balanced team composition for the upcoming World Cup. We are expecting the tournament to be more competitive than ever this year. It will be the biggest challenge that the Indian team has faced in recent times.”

Anup Kumar, who was announced as the captain of the Indian Team said “I am extremely honoured to lead the country for the 2016 Kabaddi World Cup. It's every sportsperson's dream to represent their country at a global stage. I'm proud of my team and we will all work towards bringing honour to India.”

The 2016 Kabaddi World Cup Ahmedabad is all set to bring nations belonging to diverse geographies- USA, England, Australia, Iran, Poland, Thailand, Bangladesh, South Korea, Japan, Argentina and Kenya- to the home of Kabaddi. With the platform set for the world's best to take on each other, the sport is all set to take its next big leap.

Star Sports will be the official broadcaster of the 2016 Kabaddi World Cup. All matches will be telecast exclusively on the Star Sports network and Hotstar.