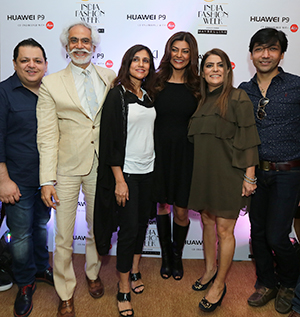 The Huawei P9 is the first smartphone from the collaboration between Huawei and the global iconic camera brand Leica, resulting in a stunning dual-lens camera in a smartphone, which sets a new benchmark in smartphone camera technology, with more light and better clarity, to capture brilliant colour and striking black and white images in true Leica style. Images from the ground-breaking dual-lens camera are brought to life on a 5.2 inch full HD display. The P9 is powered by Huawei's latest Kirin 955 chipset and runs Android Marshmallow 6.0.

Speaking on the occasion, Sunil Sethi, President FDCI, said, “We are pleased to announce Huawei P9 as the official cameraphone for the Amazon India Fashion Week Spring Summer 2017. At AIFW,(Amazon India Fashion Week) photography is vitally important to capture the best images from the fashion shows. Being the world's first smartphone to feature iconic Leica camera technology with dual lens, and a stunning design, the Huawei P9 was our first choice to capture images at AIFW SS'17 as the official camera phone.”

Peter Zhai, President, Consumer Business Group, Huawei India, commented: “We believe the desire to be creative by changing the way people experience the world around them. With the P9, working with Leica, we have challenged the norm of what was possible in lens technology and created a game-changer for smartphone photography. Partnering with FDCI for the Amazon India Fashion Week Spring Summer 2017, will enable people in India to view what the Huawei P9 is capable of delivering, in terms of stunning image quality, comparable with the best cameras.”