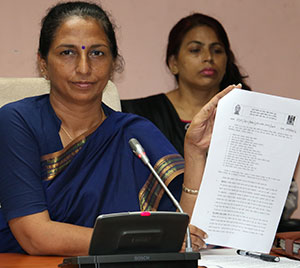 While addressing a press conference at Civic Centre, Smt Nagpal said that the steps taken by the North Delhi Municipal Corporation are aimed at transforming MCD schools into centers of quality education.

Smt Nagpal said that after taking charge as North MCD Education Committee Chairman, she started surprise visits of North MCD schools and has covered 16 schools in 7 Assemblies so far. These include Patel Nagar (4 schools), Adarsh Nagar (3), Burari(2), Karol Bagh (1), Shalimar Bagh (4), Timarpur (1) and Model Town (1). It has helped in improving the systems as well as taking actions against those teachers and other staff who are responsible for dereliction.

Smt Nagpal said that the steps such as surprise visits of MCD schools, regular meetings of principals/incharge and other various officials and coordination-communication drives with students also have ensured better atmosphere and improved conditions of these schools which has benefitted more than 3.5 lakh students especially those belong to economically weaker sections.

Smt Nagpal said that the North MCD has been working in interests of the people of Delhi without any publicity. She said that AAP Government of Delhi is engaged only in publicity stunts. It has done nothing for welfare of people of Delhi. She said that the Delhi Government has been taking credit of starting parents-teachers meetings in Delhi Government schools but MCD schools have been organizing such meetings for a long time. Such programmes should be organized on a regular basis and should not be made an issue of publicity.

Smt Nagpal said that public money should not be wasted on “self-praise”. On the Delhi Government’s decision to start parents-teachers meeting, she said that “Better late than never.