Chandigarh All Geared up for International Day of Yoga-2016 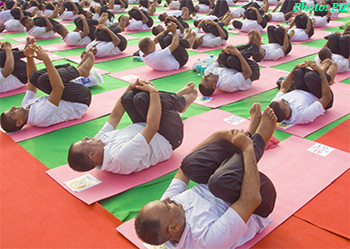 Chandigarh is all geared up to host the Second International Day Of Yoga, IDY-2016. Prime Minister Shri Narendra Modi will lead the IDY-2016 celebrations by participating in a mass Yoga demonstration of Common Yoga Protocol at the Capitol Complex in the city beautiful.

The function will begin at 6.30 am. It includes 45 minutes of Yoga protocol demonstration. Around thirty thousand people are expected to participate in the event at Capitol Complex, Chandigarh while ten thousand more will perform at 100 different venues in the city of Chandigarh. The emphasis this year will be on participation of Divyangs, youths and people from weaker sections of the society.

Elaborate arrangements have been put in place to ensure smooth performance at the venue. The complex is divided into 8 blocks where 500 master trainers along with their team members will perform. Nearly 600 buses are being used to ferry the participants to the venue. 300 pre-fabricated bio-toilets and 30,000 mats are being used on the occasion. A full dress rehearsal took place at the venue yesterday.Yoga Protocol Asanas shall be performed on the occasion. The Asanas are divided into different sections, beginning with the lossening up exercises, like neck bending and body twisting. The second section of Asanas done in Standing Posture comprises of six yoga exercises, including Tadasana or palm tree posture and Vriksasana or the tree posture. The third section is in Sitting Postures, with five asanas, including Sasankasana or the hare posture and Vakrasana or spinal twist posture. Following these are the three Prone Postures, including Bhujangasana or the Cobra Posture. This shall be followed by the Supine Postures consisting of Sethubandhasana or the bridge posture, pavanamuktasana or wind releasing posture and finally Savasana or the dead body posture. Breathing exercises like Kapalbhati and Pranayama shall be performed next by dhyan or meditation and finally Shanthi Path.

In the run up to the event, Prime Minister Shri Narendra Modi released a commemorative postal stamp on Surya Namaskara in New Delhi today. The Ministry of Human Resource Development has taken up the initiative 'Yoga Olympiad' with participation from school children from government schools in order to promote Yoga.

Reputed Yoga institutions will participate in the International Day of Yoga by leading the demonstration functions across the country. Yoga demonstrations will also be organized at several places in the national and state capitals. Similar events have been planned at all district headquarters in the country in association with prominent Yoga institutions of the country. In the National Capital Territory Delhi, the main events organized by Ministry of AYUSH and New Delhi Municipal Council (NDMC) will be at Connaught Place, Lodhi Garden, Nehru Park and Talkatora Garden. Other major Yoga events to take place in Delhi will be in Dwarka, Rohini and Yamuna Sports Complex.

Over 173 Indian missions across the world are also organizing Yoga demonstrations to spread awareness for International Day of Yoga. Besides the main event on the Yoga Day, several Indian missions have organized a series of curtain raiser events in various parts of the world to spread Yoga awareness.

A theme song for International Day of Yoga, named ‘Yog Geet’ has been released this year in addition to the Yoga Protocol of forty five minutes. This song is of 3 minutes and 15 seconds in Hindi language. The song is written and produced by Deeraj Saraswat and Sh. Gandhar T.D. Jadhav and Ms. Gatha Jadhav have given their voice to the song. Music has been composed by Sh. Sumanto Ray.