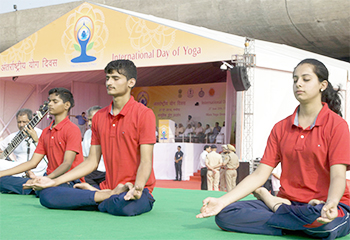 A colourful and grand rehearsal for the International Day of Yoga 2016 took place this morning at the Capitol Complex, Chandigarh. Prime Minister Shri Narendra Modi will lead the Second International Day of Yoga celebrations in the country and across the globe by participating in a mass Yoga demonstration of Common Yoga Protocol at the Capitol Complex in Chandigarh on the morning of 21st of June.

Nearly 30,000 participants from across the tri-city participated in the rehearsals presided over by the Hon’ble Governor of Haryana and Punjab and Administrator U.T Chandigarh, Shri Kaptan Singh Solanki. Secretary, Ministry of AYUSH, Shri Ajit M. Sharan; Adviser to the Administrator , Chandigarh Sh. Parimal Rai and senior officials from Ministry of AYUSH and senior officials of the Chandigarh Administration also took part in the rehearsal.

The rehearsals began at 7:30 am and got over at 8:15am and saw the participation of persons from ITBP, Defence forces, Panjab University, Divyangs, various yoga foundations, school children and the selected few from the yoga orientation training camps. For the first time in International Day of Yog , 150 Divyangs would be assisted for performing the Yoga asanas during the International Day of Yoga celebrations at the capitol complex.

Shri Kaptan Singh Solanki inspected all arrangements for second International Yoga Day. Addressing the gathering he said “Yoga is an invaluable gift of ancient Indian tradition. It embodies unity of mind and body; thought and action; restraint and fulfillment; harmony between man and nature and a holistic approach to health and well-being.”

Appreciating the foolproof and excellent arrangements done by Chandigarh Administration, the Governor thanked the participants for showing their complete commitment to celebrate this mega event in a big way.

Yoga Protocol asanas were performed during the rehearsals. The asanas are divided into different sections, beginning with the loosening up exercises, like neck bending and body twisting. The second section of asanas done in Standing Posture comprises six yoga exercises, including Tadasana or palm tree posture, and Vriksasana or the tree posture. The third section is of Sitting Postures, with five asanas, including Sasankasana, or the hare posture and Vakrasana, or spinal twist posture. Then comes three Prone Postures, including Bhujangasana or the Cobra Posture. This is followed by the Supine Postures, which comprises three asanas, including the difficult Setubandhasana or the bridge posture, Pavanmuktasana or wind releasing posture and finally Savasana or the dead body posture. Breathing exercises like Kapalbhati and Pranayama follow, then a spot of dhyan or meditation, and finally the Shanti Path.

The main event on International Day of Yoga will witness participation of nearly 35000 people at the Capitol Complex, Chandigarh and 10,000 persons at 100 other locations across the city.

The live broadcast of the International Day of Yoga will be done by Doordarshan and All India Radio from Chandigarh. The Common Yoga Protocol will begin at 7.00 am and last for 45 minutes.