A big boost to tertiary healthcare and medical education in the region: J P Nadda 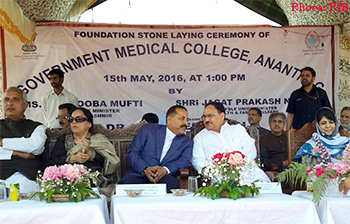 Union Health and Family Welfare Minister Shri J P Nadda laid the foundation stone for three new medical Colleges at Rajouri, Anantnag and Baramulla districts in Jammu and Kashmir. “The new Medical Colleges will strengthen the medical infrastructure and give a big boost to tertiary healthcare and medical education in the region”, Shri Nadda stated. He said that with total outlay of ₹ 189 crore each, the three new Medical Colleges will add 300 MBBS seats per year in the States with 100 seats per College. In addition, the medical infrastructure in the districts will be strengthened with addition of a 300 bed facility attached to each college.

The Union Health Minister stated that in addition to these new initiatives, the Government Medical College, Jammu and Government Medical College, Srinagar in the State of J&K have been taken up for upgradation under PMSSY with an outlay of ₹ 120 Crore (i.e. Central contribution of ₹115 Crore and State share of ₹ 5 Crore) for each medical college. He added that ₹ 2194.8 crore since inception and ₹ 688.8 crore during last two financial years has also been released to Jammu & Kashmir state for implementation of programmes approved under National Health Mission (NHM). Shri Nadda said that the State is receiving higher allocation per capita like the North East (NE) States. State also has a provision of Hard Area Allowance, where maximum of ₹ 20,000 is provided to Medical Officer.

Shri Nadda stated that the Hon’ble Prime Minister had announced development package for Jammu & Kashmir on 7th November, 2015 which includes creation of two AIIMS-like institutions. Moreover, one time grant of up to ₹120 crore each for 2 State Cancer Institute at Jammu and Srinagar and up to ₹45 crore each for 3 Tertiary Care Cancer Centre (TCCC) at District Hospital in Kupwara, Kishtwar & Udahmpur districts has also been approved. Shri Nadda said that these new initiatives shall significantly improve the healthcare facilities in the State.