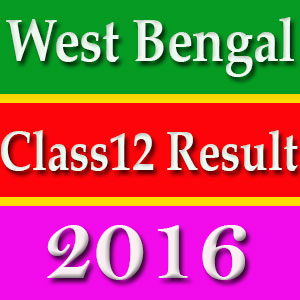 West Bengal board Class12th Result 2016 has been declared by the West Bengal Council of Higher Secondary Education today on May 16, 2016 is declared.

West Bengal Uchyaa Madhyamik results 2016 has been declared on the official website of West Bengal board athttp://wbresults.nic.in/, where candidates can check their results by entering their roll number and date of birth.

In addition to that, candidates can also obtain their WB board 12th results 2016 via SMS also by following the procedure given below:

The West Bengal Council of Higher Secondary Education has declared the results for all the streams including science, commerce and arts today.

West Bengal Class 12th examinations 2016 were conducted by WBBSE earlier this year in which lakhs of students appeared from different part of the state and were waiting for their results eagerly since then and the wait is finally over with the declaration of West Bengal board Class12 Results 2016.

It was West Bengal Council of Higher Secondary Education founded in 1951. The headquarters is located at Vidyasagar Bhavan, Salt Lake City, Kolkata (India).

Newstrackindia.com team wishes all the candidates 'GOOD LUCK' for their Uchyaa Madhyamik results 2016.