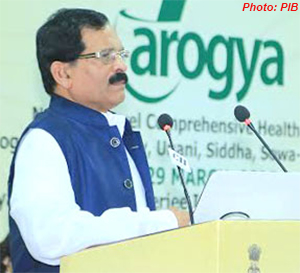 On the occasion, the Union Minister of State (IC) for AYUSH, Shri ShripadNaik also released the Yoga Protocol for the second International Day of Yoga falling on 21st June, 2016.

In his inaugural address, the Minister said Ayurveda is India’s gift to the globe. Taking into consideration this fact, India has entered into an agreement with World Health Organization to popularize this traditional system of medicine across the world. Mr Naik Said, India has also signed anMoU with Amercia for a Joint Research under AYUSH in the field of Cancer.

The Union Minister informed that the Union Government contemplates to open one AYUSH Hospital in every district of the country. He said, the AYUSH Ministry has also plans to establish an All India Institute of Yoga and Naturopathy and a unit of each Pathy in Goa in the near future.

The four day fair aims to create awareness among the members of the public about the efficiency of the AYUSH systems, their cost-effectiveness and the availability of herbs and plants used for prevention and treatment of common ailments at their doorstep through various mass media channels to achieve the objective of Health for all.