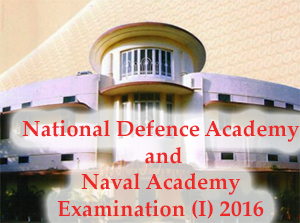 The Union Public Service Commission will be conducting the National Defence Academy and Naval Academy Examination (I) 2016 at different venues located at 41 Centres throughout the country on Sunday the 17th April, 2016 (Sunday). The e-Admit cards for the candidates have been uploaded on the Commission's web-site http://www.upsc.gov.in, which may be down loaded. Letters of rejection to the candidates stating reason (s) for rejection have already been sent through e-mail provided by the candidates. If any applicant is not able to down load his e-Admit card, he may contact UPSC Facilitation Counter on Telephone Nos. 011-23381125, 011-23385271 and 011-23098543 between 10:00 A.M to 5:00 P.M on all working days. The candidate may also send fax message on Fax No. 011-23387310. The candidate may note that no paper admit card will be issued.

In case the photograph is not printed or is not visible on the e- Admit Card, candidates are advised to carry two (2) identical photographs (one photograph for each session) along with proof of identity such as Identity Card (Students I card used by school/college), Voter I Card, Aadhaar Card, Driving License, Passport etc. and printout of e-Admit Card to the venue of the Examination to secure admission in the Examination.

(i) e-admit card and

(ii) important instructions to the candidates (which must be read carefully well in advance). In the past cases have been noticed where some candidates have faced difficulty in accessing the server at the last minute on account of server overload. To avoid the last minute such candidates are advised to download their e-Admit Card early.