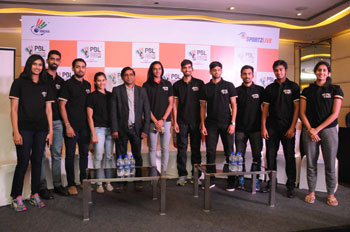 Hyderabad, December 9: Rio Olympic gold medalist  Carolina Marin set the stage for an explosive start to the Premier Badminton League starting next month by saying that she is looking forward to the clash with Rio silver medallist PV Sindhu.

"The final at Rio was a tight contest. Sindhu is a good attacking player. I look forward to playing her again. I am sure it will be interesting," Marin said through a video link during a press conference here on Friday to launch the bigger and grander edition of the League.

The Spanish superstar who had been picked up by Hyderabad Hunters for a phenomenal Rs 61.5 lakh is expected to face off with arguably India's best player currently who will be representing Chennai Smashers in the opening round of PBL-2.

“It’s a pleasure to be associated with the PBL. It’s a very exciting tournament and we have a very strong team in the Hunters.  I believe we can go all the way and win the tournament, and surely," she said. "I am looking forward to my stay in Hyderabad. I hear that fans in india turn up in huge numbers. I am excited about the event that awaits me," she added.

Sindhu brought a smile to Marin's face by not only welcoming her to India, but also to her home to enjoy Hyderabad's most famous dish: the biryani. "I am sure she will enjoy her stint in India. I would like her to come home to relish home-made biryani," she said that only underlined the healthy rivalry that is brewing between them.

Marin, who is seen as a complete player, believes that the format of the League as also each match is (best of three games with each game fought over just 11 points) going to add to the overall excitement. “It is going to be a very tough format. As each game is only for 11 points, we will have to focus on each point. And, this will surely change everyone’s strategies and the way they approach the game,” Marin explained.

“The shorter format of the game will mean that you can’t give away leads of four or five points," Sindhu said. "It will be very difficult to come back into a game then," she added.

Kidambi Srikanth, India’s highest ranked player and the most expensive Indian for PBL 2 concurred. “I’ve never played in this format and it surely is going to be challenging. But, I’m mentally and physically prepared to take my game to the next level,” he said.

Prasad Mangipudi, the Managing Director of SportzLive and the man behind the League is understandably excited about the innovations. “I’m sure that this format will make it more exciting for the spectators as the games will be more intense and will be played at a much higher speed.”

The two-week long sporting extravaganza from January 1-14 will be held across six cities, with Hyderabad hosting the first set of matches and New Delhi the finals. All the top players from India have been picked up by the teams, with as much as Rs 50 lakh being paid for some of them.

The Delhi Acers are owned by Infinite Computer Solutions while the Chennai Smashers and the Hyderabad Hunters are owned by Wone Pvt. Ltd and Agile Security Force Pvt. Ltd. Awadh Warriors, which has been in the League since its inception, is owned by Sahara Adventure Sports Limited. While the Mumbai Rockets are owned by Medhavi Sports Pvt. Ltd the Bengaluru team is owned by the consortium that has invested in Kerala Blasters, an India Super League team.

Venues: Same as above

No of matches in each Tie: 5