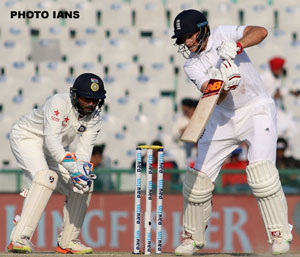 The fourth test match between India and England, which is running at Wankhede Stadium, and at the time of lunch the England team reached at 117/1 on the first day.

England lost its first wicket at 99/1 of its skipper Alastair cook who was dismissed at 46, made a partnership of 99 runs in 25.3 overs with Jennings for the team.

Alastair Cook dismissed when he was stumped by Parthiv Patel off the bowling of left arm spinner Ravindra Jadeja.

When lunch was called Debutant Keaton Jennings was batting on 65 and the number 3 batsman Joe Root was unbeaten on 5.

In the series of five test matches the Indian team is leading the series with 2-0 where the first test match was a tie and then India won the second and the third test match.

The England team is now in the condition of do or die in series. England has to win this test match because if it looses this test match then it will loose the series and won’t be able to even draw the series.