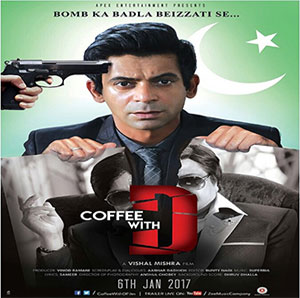 The makers of Coffee with D have launched the trailer of the film. Marking the silver screen debut of our famous Dr. Mashoor Gulati a.k.a. Sunil Grover, opposite the hilarious Zakir Hussain, the movie is a complete laugh riot!

Sunil Grover essays the character of Arnab Ghosh, a controversial television journalist who finds his career undergoing a slump until he crosses his paths with the infamous Don!

The only way to get his TRPs jet-setting is to create a controversy and who better than the Don himself! Thus begins a journey filled with humor and laughter galore!

An Apex Entertainment production, Coffee with D is directed by Vishal Mishra and produced by Vinod Ramani. The movie will hit the theatres on 6th January 2017.