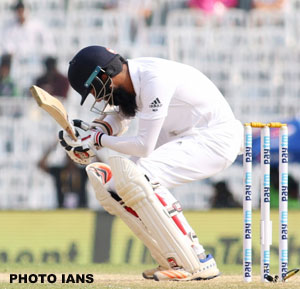 In the fifth and final test cricket match, which is being played between India and England, the visitor’s team reaches on huge score of 433 for loosing its 8 wickets. England won the toss and elected to bat on the first day of the Chennai Test match.

Moeen Ali (146) made England to post 410 runs in their first innings and now Liam Dawson (50) and Stuart Broad (04) are on crease and riding their team towards a big score. Adil Rashid (60) looses his wicket on team score of 429 runs and Umesh Yadav takes his wicket.

Indian spinner Ravindra Jadeja is the most successful bowler with 3 wickets in hand and Ishant Sharma and Umesh Yadav have taken 2 wickets while Ravichandran Ashwin got only one wicket in his home ground.

England posted 284/4 in the last night game and in the morning session, team lost its two wickets very early but then Liam and Adil made partnership to made England in a stable situation.