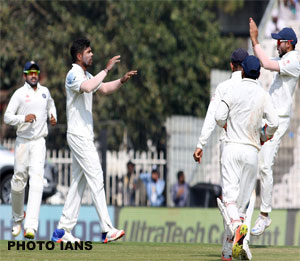 In the fifth and final test cricket match, which was being played between India and England, India was at 60 runs for no loss at stumps of the second day. India was chasing the huge score of 477 given by England, the Indian openers K.L. Rahul and Parthiv Patel were on crease.

India reached 60/0 in their first innings at stumps in reply to England’s 477 on the second day of the fifth and final Test at the M.A. Chidambaram Stadium in Chennai.

Senior wicketkeeper-batsman Parthiv Patel, who was promoted to open the innings in place of injured Murali Vijay was unbeaten on 28 runs with Lokesh Rahul (30) when the umpires dislodged the bails for the day. Vijay had injured his shoulder while diving to stop the ball at point during the second session of play. The Chennai batsman is expected to bat down the order on Sunday.

Earlier, England lost their remaining two wickets just after the tea break to end their first innings at 477.
Coming into bat in the final session, Parthiv and Rahul started on a cautious note, denying any chance to the English bowlers and ensured that India went into close of play without any hiccups.

The runs came at a steady clip and the openers picked up five fours between them, in their contrasting styles: mostly off the front foot for the tall, languid Rahul, and mostly off the back foot for Parthiv. Rahul consumed 68 deliveries for his 30 runs with three hits to the fence while Parthiv's 52-ball knock comprised of just two boundaries.

Earlier, leg-spinner Adil Rashid (60) and debutant Liam Dawson (66 not out) frustrated India with an 108-run eight-wicket stand as England recovered from a mini collapse to reach 452/8 at tea.

Dawson and Rashid, resuming play at 352 for seven with individual scores of 27 and eight respectively, batted with grit and resoluteness to keep India at bay for the major part of the second session as they went on to score first and second Test fifties respectively.

Their 108-run partnership was the second highest for the eighth wicket at the M.A. Chidambaram Stadium.
After Rashid's dismissal, Stuart Broad in the middle joined Dawson and the latter was unbeaten on a quick 17 runs, as the tea was called.

England, who had lost three wickets in the morning session scoring 68 runs, was in great need for a big partnership.

Dawson and Rashid built up their stand by blocking the deliveries, especially when Ashwin was operating along with an in-rhythm paceman Ishant Sharma. Once the duo spent some time, they scored runs in ones and twos, mixing it with occasional boundries.

They were aided by the lack of accuracy from India's third spinner, Amit Mishra. The Haryana leg-spinner, coming into the team after the first Test played in Rajkot from November 9 to 13, struggled with his line and length.

After playing him confidently, the English duo also fared well against the other two spinners, Ravichandran Ashwin and Ravindra Jadeja.

England, however, lost the remaining wickets of Broad (19) and Jake Ball (12) quite cheaply as Dawson lost short of partners at the other end.

While Broad was run out by Rahul, Ball was Mishra's lone wicket in the innings. Dawson, who finished unbeaten on 66, has also become the highest scorer by an English debutant batting at No. 8.

In the series of five matches, India won three consecutive wins and leading the series with 3-0 whereas the first match between India and England was a tie and after that India didn’t loose any match.