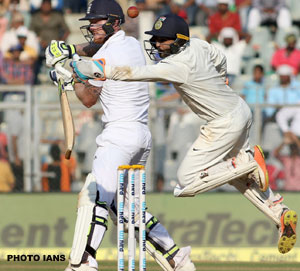 After winning the fourth test cricket match India is also seeking to win the fifth test of the series and end it up with four consecutive wins. After winning the toss England skipper Alastair Cook elected to bat against India in the final Test match.

India is in attacking form as the England openers were back to pavilion early, Indian spinner Ravindra Jadeja and fast bowler Ishant Sharma dismissed Keaton Jennings and Alastair Cook. England is now batting at 36/2 and Joe Root (21) and Moeen Ali (3) are on the crease.

Both the teams India and England made changes, England named Liam Dawson and Stuart Broad in team while James Anderson and Chris Woakes were left out. Whereas India replaced pacer Bhuvaneshwar Kumar with Ishant Sharma.