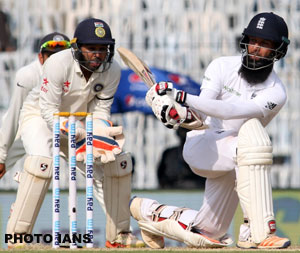 On the first day of fifth test cricket test match which was being played between India and England came to an end in which England reaches on 284/4 in their first innings. Earlier, England won the toss and elected to bat but the Indian bowlers Ravidra Jadeja and Ishant Sharma made Alastair Cook and Keaton Jennings to go back to pavilion very early.

When England lost its two wickets at the beginning of the match, then an excellent batting by Moeen Ali and Joe Root rode England to post 284/4 in their first innings on the opening day of the fifth and final cricket Test.

At the end of the day, Moeen Ali was playing on 120 runs and Ben stokes was at 5 runs.

Ali was unbeaten on 120 at the close with Ben Stokes batting on five at the other end. Joe Root was unlucky to miss out on what would have been a well-deserved century as left-arm spinner Ravindra Jadeja snared him on 88 following an unsuccessful review.

England was struggling at 21/2 in the morning session, Joe Root and Ali came together to add 146 runs between them to take out of trouble.

The Indian left-arm spinner Ravindra Jadeja was the most successful among the Indian bowlers with figures of 3/73.