Dada says, Kohli is two time more aggressive than me 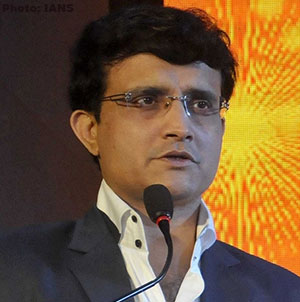 Former Indian Captain Sourav Ganguly who was well-known batsman as well as the angry man of Indian team. Former skipper Sourav Ganguly once celebrated India’s win in triangular series 2002 by taking off his shirt at the Lord’s Cricket ground and now he said Virat Kohli is more aggressive than me.

Sourav Ganguly said that Virat Kohli is two-times more aggressive as the India captain than me. Ganguly was considered as the aggressive leader of the Indian Cricket team.

Ganguly said, “his aggression is two-times more than me,” on the sidelines of the Sourav Ganguly foundation and Sourav Ganguly Cricket School launch, which is powered by PitchVision Cricket Technology.

The technology is a motion-tracking tool, which helps players at the grassroots level better their skills through television and academy style feedback.

Kohli also is not known to give an inch to the opposition. The dashing right-hander batsman Virat Kohli recently led India to their fifth successive Test victory after India's innings and 36 runs win at Mumbai, their biggest triumph over England in Tests at home.

Ganguly said on his Foundation aimed at school children and the lesser privileged ones at different district schools of the state, that, "through PitchVision we promise to take cricket in West Bengal to the next level.

He also added, "we will appoint 100-150 coaches to help in the training of various kids from different schools who will be associated with us. Free coaching will also be given to cricketers who are not financially strong."