India vs England: Kohli’s century made India to reach 385/7 after wobble 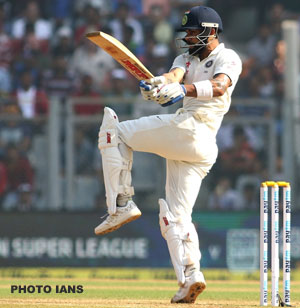 The Indian Captain Virat Kohli made a century with 13 fours and now he is batting at 109 runs not out made India to keep chasing the England’s score of 400 runs at the third session of third day of fourth cricket Test match.

Virat Kohli’s century helped India a lot in the critical situation where India is loosing wickets on one side and on one side he kept scoring for the team.

After wobble of Indian cricket team, Virat Kohli’s presence helped India to reach at 369 after loosing its 7 wickets. At the time of lunch India was at 247/2, Virat and Murali were at creeze and at that time India was in strong condition but after lunch India’s wobble started and the team looses its 5 wickets of Murali Vijay (136), Karun Nair (13), Parthiv Patel (15), Murali Vijay (136), Ravindra Jadeja (25) and Ravichandran (0).

Except Murali who made an extra ordinary inning of 136 runs, all the batsmen departed in a quick succession.

Vijay struck his eighth ton and second of the series, to guide India to a strong position in response to England’s score of 400, after resuming at their overnight score of 146/1.

Vijay completed his century with a single in the 72nd over of India’s innings, hitting nine fours and three sixes.

Vijay completed his century with a single in the 72nd over of India's innings, hitting nine fours and three sixes.