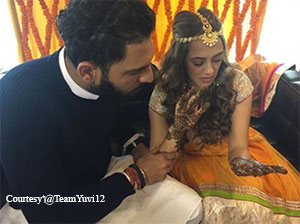 Cricketer Yuvraj Singh and actress Hazel Keech will tie knot in a grand ceremony today. The cricketer has also invited PM Narendra Modi for the wedding.

The Mehendi function took place yesterday in Yuvraj's home in Chandigarh. After winning the third Test inside fourdays Indian Team attended the Sangeet and is also invited for the wedding.

Yuvraj , aged 34, made his ODI debut for India in 2000 at Nairobi. Yuvraj was also part of Under 19 World Cup winning team of 2000. Yuvraj was Man of the Series in the 2011 World Cup which India won after 28 years.  Hazel Keech belongs to England and she made her Bollywood debut in 2011 Salman Khan starrer Bodyguard. The couple got engaged in Bali, Indonesia