Third test: England won the toss and elects to bat 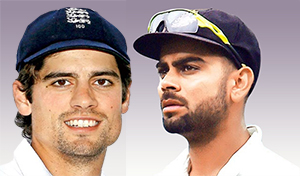 In the third test against India, England won the toss and elected to bat at the Punjab Cricket Association I.S Bindra Stadium on Saturday.

England made three changes in their playing XI by including middle order batsman Jos Butler, pacer Chris Woakes and off-spinner Gareth Batty in place of Ben Duckett, injured Stuart Broad and Zafar Ansari respectively after the big defeat of 246 runs by India in the second test.

In the series of 5 test matches India is leading with 1-0 in which first match was a tie and the second test was a big victory for India by 246 runs over England.