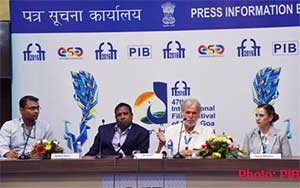 At the 47th International Film Festival of India, Mr. Sid Ganis, Former President of Academy of Motion Picture Arts and Sciences (AMPAS) and American Motion Picture Executive and Producer and Ms. Tessa Idlewine, the Preservationist at the AMPAS addressed the Press conference in Goa. Mr. Sid Ganis said that the Academy has been developing a very close relationship with the Indian Film makers and with Goa through the International Film Festival of India. In the past few years, the Academy is getting to know Indian Celebrities and Film makers and wanting to enhance and expand their relationship with Indian Film Industry. He further added that the Academy is not just an Academy for America or Hollywood alone, but about Film makers and artists across the world.

At the 47th IFFI, Mr. Ganis has conducted a special workshop on 'Foreign Language Film Selection for Oscar Awards by AMPAS. Mr. Sid Ganis had a distinguished career in Hollywood as an executive at major studios including Sony Pictures, Lucasfilm, Warner Bros. and Paramount and produced films such as Big Daddy, Deuce Bigalow, Mr. Deeds, The Master of Disguise, Akeelah and the Bee.

Ms. Tessa Idlewine, the Preservationist at the AMPAS described about the criteria, how a film is being selected for preserving, saying that firstly the preference is given to the Oscar nominated films and that is not all. Apart from the Oscar nominated films, the ones which are unique, important and decaying are also preserved. Out of the 37 films under the project, 21 have been restored successfully. Commenting over the preservation of the work of Satyajit Ray, Tessa said that the AMPAS is working continuously to save the artwork of the maestro and has saved his trilogy ‘Apu’, where the negatives of the films were almost burnt. At the 47th IFFI, she has held a workshop on Restoration of Satyajit Ray Preservation Project.

Mr. Senthil Rajan, Director Directorate of Film Festival told media that National Film Achieves of India (NFAI) and Academy of Motion Picture Arts and Sciences (AMPAS) will have more collaboration to preserve, conserve and restore more number of Indian Films in future. Mr. Sid Ganis, the Former President at AMPAS and Ms. Tessa Idlewine, currently Preservationist at AMPAS further discussed about the 25 year old Active Preservation Program that started in 1991 and has 4 full time Preservationists. They also talked about the Academy vaults and the 92,000 film titles stored in them.