Sindhu made entry to semi-finals at Hong Kong Open 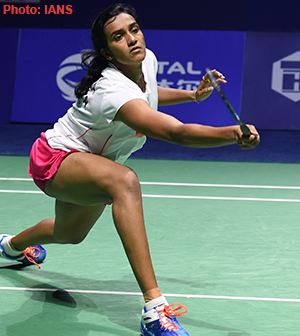 It was a tough challenge for the Olympic Silver medalist at Hong Kong Coliseum but leads to win a battle with 21-17, 21-23, 21-18 in one hour and nineteen minutes.

In starting Liang taken the lead in the early stages of the opening game and it was difficult for Sindhu but pulled a level at 8-8. After that Sindhu never looked back and gaining four consecutive points gave her a lead of 14-10 and hence she taken the first game from here.

In the second game Liang made a better start and taking 3-0 lead over Sindhu but soon Sindhu covered it up. But it didn't ends up here, when Sindhu was taking a 16-12 lead at one stage then Liang equalised at 18-18 and at 21-21 both the shuttlers locked which levels the scores and leads to a tie finish.

In the third set the Indian shuttler was in trouble as Liang leading with the lead of 14-7 at one stage but Sindhu fought back and consecutively won six back to back points and leads game to the tie level at 15-15.

At the end of the match, India's shuttler P.V Sindhu won the game and continued her journey in this Hong Kong Open. Rio Olympic star shuttler made his track clear to the semifinals here by defeating Xiaoyu Liang in a tough match and it was totally a exciting match.