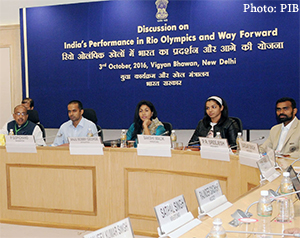 In his opening remarks, Shri Vijay Goel stated that after conclusion Of Rio Olympics 2016, he has initiated consultations with players, coaches and National Sports Federations to elicit their views and suggestions. He stated that he had written to all 117 sportspersons who participated in Rio Olympics 2016, and he held a meeting with President and Secretary General of Indian Olympic Association and National Sports Federations on 29.9.2016. It is in the wake of these wide ranging consultations initiated by the Ministry of Youth Affairs & Sports that the Round Table Discussion has been organized in Vigyan Bhawan, which was first of its kind.

Participants gave their frank and forthright views and suggestions for making India realize its potential and improve its position in medals tally in intentional sports events including Olympic Games.

Following were among the suggestions made by participants:

(i) Development of second and third strings of players

(ii) Revamp of existing coaching systems to bring them in sync with the latest and modern coaching methods and techniques being employed by countries who are in the forefront of winning medals in Olympic Games.

(iv) Talent identification at sub-junior and junior level and nurturing and training them with the same commitment and passion as training and coaching the senior players.

(vi) Adoption of academies and sports persons by corporates for providing financial support under CSR.

(ix) Extending the provision of reservation for sports persons in Group A and B posts also against the existing reservation in Group C posts only.

(xi) Integration of sports with education.

(xii) Monitoring of the training programmes and performance of the sports persons.

In his concluding remarks, the Minister stated that the Ministry will examine the views and suggestions received during the Round Table Discussion, from NSFs and other sources and will come out with an action plan. Focused attention will be given to talent identification, preparation of long term development plans for training and competitive exposure to sport persons, creation and upgradation of modern sports infrastructural facilities across the country with the involvement of State Governments and corporate and provision of sports science and sports medicine backup to players.