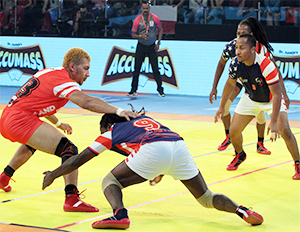 A solid team performance from Poland led to an easy 75-29 win over USA. It was Poland's first win of the 2016 World Cup here at the TransStadia Arena in Ahmedabad. Skipper Michal Spiczko led from the front and scored 16 points for Poland. Poland's victory margin was the biggest by any team in the World Cup so far

The USA remains winless and are bottom of Group B whereas Poland are fifth. Neither team have any hope of making it to the World Cup semi finals.

Poland made a swift start and led 7-2 after four minutes but USA responded with a super tackle to make it 4-8 in the fifth minute. Polish defence was in terrific form as they inflicted an all out in the sixth minute to lead 13-4. Michal Spiczko scored four points in six minutes for Poland. None of the US raiders scored in the first eight minutes as they struggled to cope with strong Polish defence. Spiczko scored his sixth point in the ninth minute as Poland led 19-6.

Poland inflicted the second all out in the 11th minute to lead 24-6 as they were making little work of an out-of-sorts US side. USA picked up their first raid point in the 12th minute as Troy Bacon opened his team's account with a two-point raid. The US defence had scored just two points each in their previous two games but they put in a much-improved performance. Spiczko, meanwhile, continued to snare raid points and scored his ninth point in 14th minute.

Dylan Banks came up with a super raid in the same minute as USA trailed 12-28. Poland forced a super tackle in the 16th minute to lead 30-13. Piotr Pamulak scored four quick points in two minutes as Poland led 34-14 after 19 minutes. USA did try to make a fight of it in the first half but Poland inflicted another all out in the last seconds of first half to lead 40-14 at the break.

The second half started with Poland raiders scoring four points in the four minutes to lead 45-14. USA forced two super tackles in the space of 90 seconds as they trailed 18-46 after 26 minutes. Spiczko scored two more points in 29th minute as Poland inflicted the fourth all out to lead 54-19. Poland were head and shoulders above USA as four minutes later they inflicted another all out to lead 63-20.

Poland continued to score points with ease in the last few minutes of the match. Sixth all out of the match was inflicted as Spiczko scored two more points to give Poland 73-22 lead. Poland recorded the maximum points by any team in the 2016 World Cup. USA would take a lot of heart from their defensive performance as Kevin Caldwell and Ronald Fields scored 11 tackle points combined. Dylan Banks scored four points with a super raid in the dying seconds and ended with eight points for USA. Poland, however, were too good for USA and crushed USA 75-29.