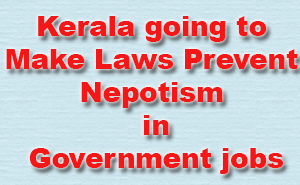 Thiruvananthapuram, Oct 13: Caught in a bind over the appointment of the kin of senior CPI-M leaders to top government posts, the Pinarayi Vijayan government on Thursday decided to frame new laws to prevent recurrence of nepotism.

In the first cabinet meeting since the controversy over nepotism charges against state Industries Minister E.P. Jayarajan surfaced, Vijayan took a strong stand against what had transpired and decided to frame a new set of laws to prevent such things from happening again.

After the cabinet meeting, Vijayan's office issued a statement that new laws would be framed to prevent similar happenings.

"It has also been decided to ask Chief Secretary S.M. Vijayanand to review all the appointments that have been made. From now on, appointments to all top posts in the state public sector will be done by an expert committee and those selected for the post will need to secure clearance from the Vigilance Department," said the statement.

Within four months of assuming office, the Vijayan government's stock took a heavy beating following the appointment of P.K. Sudheer, son of CPI-M Lok Sabha member P.K. Sreemathy and a nephew of Jayarajan.

Following the huge media outcry, both have quit their posts.

Along with these, the children of three top CPI-M leaders were also given top appointments in state public sector undertakings and all of them came under heavy attack in the social media.

Meanwhile, a Public Interest Litigation was filed against Jayarajan at a Vigilance Court here on Thursday over the appointments he had made. The court has listed the case for hearing on Friday.

On Thursday morning, Vigilance Director Jacob Thomas met Vijayan. He was later briefed by legal experts and, according to reliable information, he was likely to announce a probe into the matter.

Meanwhile, ahead of Friday's crucial CPI-M state secretariat meeting, Jayarajan is understood to have told Vijayan and state party secretary Kodiyeri Balakrishnan that he would like to step down.