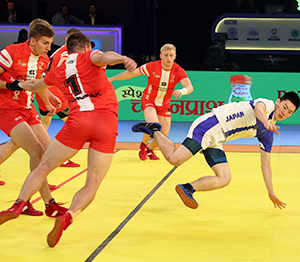 Japan secured a comfortable win over Poland as their defence put in a solid performance and remain on course for a semi final berth.

Japan recorded their second successive win as they beat Poland 33-22 in Group B. Captain Masayuki Shimokawa led from the front and scored seven points as Japan maintained a 100 per cent record in 2016 Kabaddi World Cup. Poland still remain winless and are slowly coming to terms with the finer points of Kabaddi.

Japan leapfrogged Kenya in the table and are now second in Group B with 10 points from two games. Poland are rooted to the bottom of table with one point from three games.

Japan opened their account with a bonus point in the second minute while Poland leveled the score in third minute after two empty raids. It was a cagey start from both teams and raiders struggled to get into the game and Japan led 2-1 after minutes. Poland had a slew of empty raids and Japan capitalized on it to lead 4-1 after seven minutes. Kazuhiro Takano scored his third raid point as Japan led 6-1 in the 10th minute.

Poland captain Michal Spiczko opened his account with a two-point raid as his team looked to him for some inspiration. Jan Baranowicz followed his captain’s lead with two points of his own and Poland trailed 5-6 after 12 minutes. Masayuki Shimokawa scored his first points with a two-point raid as Japan inflicted an all out in the 15th minute as Japan opened a sizeable gap to lead 16-7.

Poland scored their first tackle point in the 23rd minute as they trailed 11-21. Spiczko scored with a two-point raid as Poland reduced the gap to eight points after 27 minutes. Japan, however, were a few paces of ahead of Poland in all aspects of the game and led 27-15 after 30 minutes. Jan Baranowicz was the lone bright spark for Poland as he scored most of his team’s raid points.

With five minutes to go Japan led 28-18 and were completely in control. Surprisingly Poland had more raid points than Japan but it was their defence that put in a disappointing performance and scored just two points. Japan were never really in trouble at any point throughout the match and won 33-22.