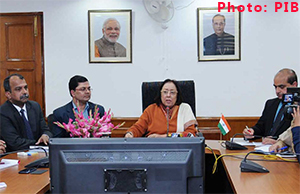 The 'Nai Manzil' scheme has been launched, for the first time in Jammu and Kashmir. Dr. Najma Heptulla, the Minister of Minority Affairs informed this while briefing the media on the new initiatives of the Ministry for the state of Jammu and Kashmir. Dr Najma Heptulla said that the scheme was launched for girls in Srinagar on 20th January, 2016 in three institutions. The institutions are Skill Development Centre, University of Kashmir and two Madarsas (Madarsa Shahi-i-Hamdan in Pampore and Madarsa Imam Sadique in Shadi pur ,Bandipora.

Under the scheme girls from minority communities will be imparted three month skill development training in seven identified sectors relevant to the region. These include training in saffron processing, food processing, embroidery, computers IT (both software and hardware), Tourism/hospitality, electronics and plumbing. Trainees will also be given stipend of Rs.4500/-for the course.

Replying to a question ,the Minister said that the scheme has already been introduced at Patna and Motihari in Bihar and Bhandup in Mumbai. It will be introduced in other Madarsas too in phased manner.

Nai Manzil Scheme is an integrated Education and Livelihood Initiative for the Minority Communities. The scheme aims to benefit the minority youths who are school-dropouts or educated in the community education institutions like Madrasas, by providing them an integral input of formal education (up till Class VIII or X) and skill training along with certification. This will enable them to seek better employment in the organised sector and equipping them with better lives. The scheme covers the entire country.