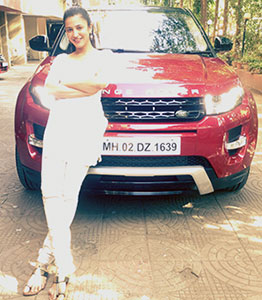 Shruti Haasan celebrates he success in the 'Gabbar Is Back' movie which was released in the box offices recently.

Shruti Haasan, who started the year with a bang with Akshay Kumar-starrer 'Gabbar Is Back', decided to celebrate her success by presenting herself with a brand new red Range Rover.

In a mood to celebrate

Shruti Haasan is in a mood to celebrate and why shouldn't she? She's just had a big hit at the start of the year with Gabbar and has quite a line up to look forward to in Hindi and the South. She has decided to celebrate her hardwork and success by gifting herself a stunning red Range Rover recently.

Says an insider source, "Shruti has had a great run with her first release of 2015 Gabbar at the BO. And she's very excited about her upcoming line up as well which combines both commercial masala films like Welcome Back and content driven performance oriented films like Nishikant Kamat's Rocky Handsome and Tigmanshu Dhulia's Yaara. And ofcourse in the south she's working with the biggies - Suriya, Vijay, Ajith in Tamil and Mahesh Babu in Telugu. She's had the fascination for the Range Rover for about a year now so when the time came, she decided to make this her second big buy after her home she purchased a couple of years ago in Mumbai."

She's really thrilled with this new gift she's presented to herself and can't wait to spin around town in it.