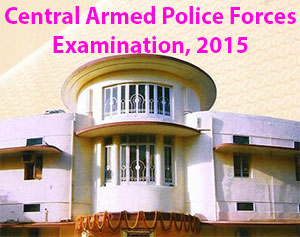 UPSC released the e-Admit card for the Central Armed Police Forces (Assistant Commandants) Examination, 2015 on its official website http://www.upsc gov.in. Candidates can login to the website and download their admit card for the upcoming examination.

Union Public Service Commission will be conducting the Central Armed Police Forces (Assistant Commandants) Examination 2015 all over India on Sunday, the 12.07.2015. The Commission has uploaded the e-Admit Cards for the examination for the convenience of the admitted candidates (Reasons/grounds for rejection of application in respect of rejected candidate are also uploaded ) on its website ( http://www.upsc gov.in.)

The candidates are advised to take a printout of the e-Admit Card well in advance to avoid last minute rush. In the past, cases have beennoticed where some candidates have faced difficulty in accessing the server on the last day on account of server overload.

In case of any discrepancy in the e-Admit Card, the same may be communicated to the Commission immediately to enable the Commission to take a decision in the matter.