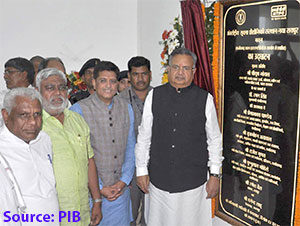 Will be a Catalyst of Growth in IT Sector

Shri Piyush Goyal Minister of State, (IC) for Power, Coal and New & Renewable Energy inaugurated the International Institute of Information Technology (IIIT) at Naya Raipur , Chhattisgarh today. Speaking on the occasion , Shri Goyal said the state of art IIIT would be catalyst in attracting the scientific talents from the entire country .It is comparable with any European institute having smart classroom well equipped labs and gigabit internet connectivity ( The National knowledge Network (NKN) . The concept of IIIT has been inspired by Bellur math founded by Swami Vivekanand, the Minister said. Shri Goyal further stated that an Innovation lab set up in the institute would serve as research centre for innovation of fuel technologies, reducing wastage of water, pollution control . It will be source of job creation. Shri Goyal, also announced that NTPC would contribute 20 crore for upgradation of engineering college in Bilaspur and one crore for trauma centre built in Korba.

The IIIT has been established at the cost of Rs 200 crore by NTPC as part of the CSR initiative in the area of education The IIIT campus is spread over 50 acres land situated in Naya Raipur. In the first phase of 25 acres, has various Infra structure facilities to give the best to the students.