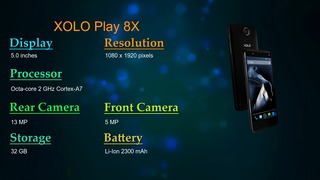 XOLO Play 8X is the smartphone from XOLO with 5.0 inches screen and the resolution of the screen is 1080 x 1920 pixels pixels. Phone was announced in 2014, July.

Here we are taking about the features and specification of the phone XOLO Play 8X. This phone comes with Li-Ion 2300 mAh battery. This phone is powered with Octa-core 2 GHz Cortex-A7 processor which gives maximum performance.

Phone comes with 32 GB, 2 GB RAM and it does not provide support for microSD card slot.

Phone comes with a front camera and its specification is: 5 MP, LED flash.

Battery
Battery of the phone is Li-Ion 2300 mAh.

Display
Display size of the phone is 5.0 inches and display resolution is 1080 x 1920 pixels pixels.

Processor
This is powered with Octa-core 2 GHz Cortex-A7 processor.